A Fine Day for Walking and Birding

The weather maps on the computer and TV newscasts show practically the entirety of the USA in the clutches of a nasty system spreading Arctic temperatures and freezing rain (even in Louisiana). The exceptions include two sunny enclaves on the southeastern coast -- the Palmetto State and the Peach State. It was 81 degrees in Savannah today and nearly that toasty here along the Grand Strand. That being the case, Superdawg and I dashed out the door to get in a walk before my meetings gobbled up all available time.

At our neighborhood pond, we saw a large water bird perched on shore. As you can see, it was nervous about having its picture snapped, but I managed to capture an image in early flight as well as when it landed on the pond. (Oh, and this is not Walden's Pond -- it is far too hot around here to have suited that famed writer and naturalist. Perhaps I should just name it, in all modesty, Holland's Pond.) Anyway, I believe this rather long-necked bird was some variety of a Cormorant, which looks like a feathered friend but operates much of the time like a finned predator of the deep. Yes, I'd never seen such a stunt before moving here, but the Cormorant can actually dive underwater and stay there a few minutes in order to catch its quota of fish. (Hey, guys, do you have a fishing license?)

Bird-watching is a super side-benefit of dog-walking, and both are pursuits that can tuck nicely into the schedules of seniors seeking fitness.

As for the unpleasant return to weather more typical of January, I suppose we of the coastal enclaves will experience that starting tomorrow (though nothing frozen, surely). As for the other kind of creeping crud about which I wrote yesterday, I have no trace of it today, so maybe I did walk right through it and over it. Stomp, stomp. Who knows, though, what tomorrow will bring when the only dawg walk would be a cold slough in the rain. 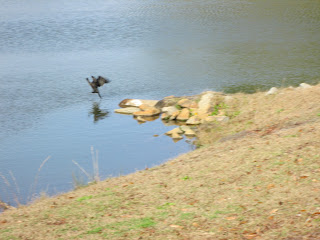 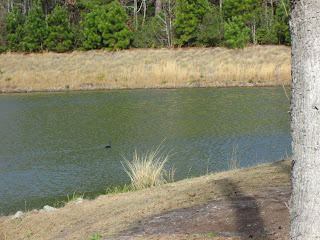