Remembrances of Snow Walks Past 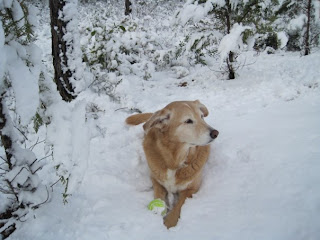 There is something majestic about taking long walks during a day and seeing the steady progression of a winter storm building with practically every step you take. Not only do you see the gathering clouds, you feel or sense the coming snow or sleet from the sharp bite of the cold wind on your face and hands. You don't need a weather forecast to know that frozen precipitation is on the way.

We (Sadie the Superdawg and me) had that kind of experience on our walk this morning. So psyched was this senior dog that she did not want to make the turn at the halfway pole and come back home. I had to tug her more than once to get her headed in the right direction, doing so because I was cold -- having worn one layer too few. The unseasonably warm temperatures this January have weakened my winter defenses.

Still, by nightfall, we were receiving only a little cold rain with temperatures several degrees above freezing here near the coast. Farther inland, some sections of both Carolinas were getting freezing rain and many  cars were slipping off highways. I certainly don't envy the folks in the Pee Dee region and up toward Charlotte and Raleigh. But I do miss snow. Today's walk into a building winter storm made me nostalgic for the old days when snowfalls of 6, 12, 18, or even 24 inches would follow the early warnings out on the trail.

I remember the crunch of snow underfoot as I walked Cheswick Park, a natural oasis within suburban Richmond, with my earlier great walking/running dog named Bandit, a shepherd/collie mix. I remember Sadie and I doing some steep and slippery sections of the Appalachian Trail, a dozen miles outside Roanoke. I remember us also covering some surprisingly idyllic snowy territory in Northern Virginia, just outside our nation's capital. I do not mean to imply that we trudged all day long in the snow. But we certainly walked enough to feel pleasantly fatigued before retiring to a fireplace and hot chocolate. Snow is a magical underpinning for memorable walks.

It does snow a little here on the Grand Strand, about once every 10 years on average. The last one came four years ago, one Sunday morning -- about 2 inches worth. Sadie and the grandkids romped in it. We built snowmen and threw the ball to Sadie. (See the photo above of her sprawled in the snow, taking a break with the ball in front of her.)  In all, we had a grand time, but by the afternoon, it had mostly melted. I do not remember even taking a good walk. It was a nice polite Southern snow -- spreading joy and then departing quietly without causing a fuss

Robert Frost's masterful poem, "Stopping by Woods on a Snowy Evening," expresses the tug-of-war between one's attraction to the charms of Nature and the mundane obligations imposed by society. Sometimes I wish the walk could just go deeper and deeper in the woods without restraint, with a good snow pack for seeing paw/claw marks and trying to identify them. But don't we always yearn for something we don't have at the moment? A beach is a wonderful place to walk, too -- any time of the year.