A Dash of Bright Red on a Dull, Gloomy Day

Coastal Carolina is in for a two-day soaking lasting until Sunday; therefore, I thought I might have to push Superdawg out the backyard to do her business. Not so. Sadie waited until a break in the rain late morning, and then barked at me until I put her leash on and took her for a proper walk. You don't think a dog could be that smart? You don't know Superdawg.

The walk made me realize anew that I need to improve my birding skills on the hoof. Seated and peering with binoculars through a back window at the bird feeders, I did a decent job for the Great Backyard Bird Count. I even figured with confidence that a bird previously unfamiliar to me was an Eastern Towhee. However, when I am on the move, and the birds are flitting about in the trees and bushes, I have a much harder time.

Today, as we approached Holland Pond, a dozen or more small birds were flying back and forth with reckless abandon, and a few nearly buzzed us. They were moving fast, but appeared to be basically dark with some white underbelly. When I got home and studied the birdbooks, the only bird that seemed to resemble the coloring was the Dark-eyed Junco. However, I have absolutely no confidence in that being my conclusion. I've never seen Juncos in that kind of frenzy. Perhaps they were some type of sparrow, though that is not what they appeared to be. Surely, you understand from this that I need to go to bird school.

My schooling ought to include identifying birds by sound. In or near wooded areas, you hear dozens of birds singing away. An expert birder probably could identify most of them just from the sound. I believe Cornell Lab of Ornithology, one of the GBBC sponsors,  has tapes of bird sounds. I will look into that; some may even be available online.

One bird I have absolutely no trouble identifying is the Northern Cardinal. (As a Son of the South, I would prefer it being the Southern Cardinal, but I will try to be magnanimous.) At least three pairs of them live out back. They typically come to feed early morning, and then just before dark. One male in particular is the brightest red Cardinal I have ever seen. Family members agree; my DW even said this Daddy Cardinal looks absolutely neon. Here is a picture I took of him on this gloomy day: 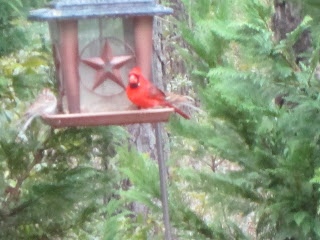 Given that my camera skills also need polishing, I may not have gotten an image that shows him quite as shiny red as he in fact is. Anyway, he is a brilliant presence when perched in the cedar trees. I am wondering why he seemingly is redder than the other males. Is that a result of the maturation process? Are the other male Cardinals not as far along in their development?

At any rate, it has been a dull, gloomy, almost depressing day, and Mr. Redbird did his part to lighten and liven it up.

"Show the Wild Birds Some Love"

Looking for a fun way to celebrate Valentine's weekend with your honey? If you are Nature-lovers, consider taking part in the Great Back... 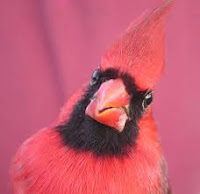