Once again, a walk had to be worked into a hectic day -- this time, one filled with medical adventures, a not-uncommon experience for senior citizens.

In the morning, we were lucky with Big Mama's routine bloodwork. When we walked into the lab waiting area, the waiting room was entirely empty. Five minutes later, it was filled to overflowing. We also were blessed with a technician skilled enough to draw blood on the first jab. Big Mama has had a lot of bad blood days in medical labs.

Since it was fasting bloodwork, we next were off to EggsUp Grill for a late breakfast. Grits, eggs, and buttermilk pancakes for the Missus, and once again the blueberry pancakes in paradise for me. They make them from scratch -- all fresh ingredients, including the blueberries -- and they are the best I've ever tasted. I took it easy on the blood sugar and calories by using Smuckers no-sugar syrup (just 20 calories per 1/4 cup as opposed to 210 for regular syrup.) With the addition of eggs and sausage links, that meal has lasted me all day -- to dinnertime, coming up shortly.

My afternoon was consumed by having an MRI at the orthopedists' office. Since they were imaging my knee in preparation for total-replacement surgery, they didn't have to put my whole body in the tube. That eased my sense of impending claustrophobia. They also gave me a choice of music: "Country," I said, "and if you make it Carrie Underwood, all my worries will go away." The technician laughed and promised to try, but the closest I got to a cheerful song was "It's Five O'Clock Somewhere," which was appropriately the concluding song. I was certainly ready for a tall drink by then. The music was a nice idea, but not at all that much relaxing, because it was heavily diluted by the loud, ominous din of the Magnetic Resonance Imaging machine.

I had to lie completely still for 20 minutes or so, because the orthopedic surgeon is going to follow the MRI results closely in doing the surgery. I don't yet understand how that works, but I'm sure there will be chances to ask questions. So I tried to be as motionless as a Marine guard at Arlington, or a Palace guard at Buckingham.

Still, the MRI was a piece of cake, believe it or not, compared to the series of X-Rays that followed. I had to stand on a high platform (which was challenging just to climb with an obsolete knee) and then be perfectly still while the tech took a whole series of X-rays from waist down to the toes. (And here I thought just my knee was going to be in play.) The young tech was all business and had me contort my bad knee inward and then hold it in the position for painfully long periods of time. At least they seemed interminable. She didn't address me as "sweetie" as the MRI tech had, so I didn't have that balm. 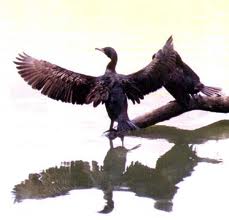 Anyway, I remain on track for the April 9 surgery. I did receive compliments from both techs for obeying orders and staying perfectly still for so long, thereby avoiding re-dos.

In the middle of the day, Superdawg helped me move the old body with a round-the-neighborhood jaunt. It was an unremarkable walk except for seeing a  Cormorant stretch its wings on its perch in the middle of Holland Pond. This is a not pretty bird but nevertheless an amazing one with its ability to dive underwater and go fishing. In fact, it's said that Japanese fishermen sometimes use Cormorants on leashes to catch fish. They often spread their wings when out of the water in order to let the wind dry their feathers.

Yes, it would be wonderful to have more of the day to walk leisurely and observe such wonders of Nature, but you have to take what life deals you. What is important is to work a walk in somewhere, somehow.