Are Coyotes a Menace or a Nuisance?

Now we've got something else to look out for on our walks: Coyotes. They are now present in all counties of South Carolina, and all states of the USA.

While it may not be likely that Superdawg and I will encounter one on a walk (given that coyotes are typically timid), I did see one when we were walking in Blue Ridge Park near Roanoke, Virginia a few years ago. It was a frigid winter's day, and the lone coyote was a desolate-looking figure on a nearby hill in broad daylight. No doubt it was scavenging for food scraps from the park trash. 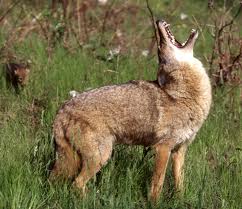 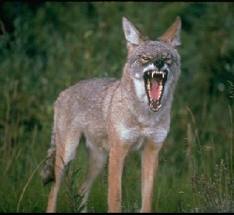 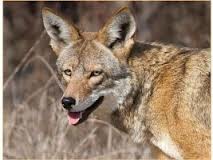 A coyote is just about always in search of a meal.

That can be a concern in the deep woods. The Natural Resources Department reports that coyotes are having a harmful effect on the Palmetto State's official State Animal, the White-tailed Deer, by preying relentlessly on deer fawns. The state's deer population has declined 30 percent since 2002. While there is still an abundant deer population, that could change if coyotes continue to proliferate.

The coyote appetite can be even more of a concern when they begin to settle near residential neighborhoods. They have been seen around here, and at last report, they had killed and eaten two cats and attacked a family dog.

Today, Superdawg wanted to make a beeline for some chewed-up mess in a grown-over area in the woods behind our house. The predator could have been something other than a coyote, It could have been a feral cat, for instance; there are plenty of those around. Just the same, I am more nervous now about letting Sadie out late at night for her final pee. Of course, I always keep an eye on her, but her hunting instincts (still strong in her senior years) are drawing her more into the woods. I just may have to hold her on a leash for that final break of the night, and hold my thick Carolina Hawthorn walking stick in the other hand just in case we have to fight back.

The chances are not great of that happening, I understand. One study showed that coyotes had bitten only 89 people over a 15-year period. By contrast, during a typical year, domestic dogs are responsible for 800,000 bites causing medical attention. Still, small children left isolated can be in danger, because coyotes are always on the lookout for a meal source about their size or smaller --- cats, small dogs, even a small child if the opportunity presented itself. (The average weight of a coyote is 35 pounds, but a few have been known to exceed 50 pounds,)

The danger level rises when coyotes get to the point of losing their fear of human beings. An article by the Manatee County Extension Service of the University of Florida notes that coyote attacks may be preceded by a "sequence of increasingly bold behavior," such as:

The Florida paper stated that coyotes displaying such aggressive behavior may present a risk to pets and small children and should "probably" be removed by a professional trapper. I would drop "probably" from that sentence. Such conditions would warrant elimination.

The more you read, the more you encounter a split between the philosophies of "living with coyotes" and reducing their numbers. I will write more about that later, but I encountered the getting-along approach more among Massachusetts conservationists than in South Carolina, where the Natural Resources Department has an open appeal on its website: "Hunters, Help Control Coyotes, Save Our Deer!" Among other details, it notes that there is a coyote trapping season from December 1 through March 1, and no closed hunting season on coyotes on private lands, and furthermore that "no hunting license or permit is required to shoot coyotes on your property within 100 yards of your home." (Of course, the caveat is to check your local laws and ordinances first.)

Anyway, Superdawg is growling at something out back through the sliding door right this very minute. Could be a cat, fox, possum, raccoon, bear, or any number of things. Of course, I am no longer ruling out coyote, and we will be taking precautions.