Day Two of the Bird Count Was a Tour de Feather!

Wow, what a spectacular Day Two of the Great Backyard Bird Count we've had!

First, the walking portion with Superdawg: We did a simple neighborhood route but when we got to our version of Walden Pond/aka Holland Pond we were dazzled by a Canada Goose flyover in "V" formation. And not only did they fly over, but they then circled and landed on the pond right in front of us. I couldn't get my camera out in time to capture them in flight, but I do have a few shots of some of them on the pond. They kept sailing in formation from one side of the pond to another. When it became apparent Sadie and I were deterring them from setting up for a picnic, we walked on down the road. 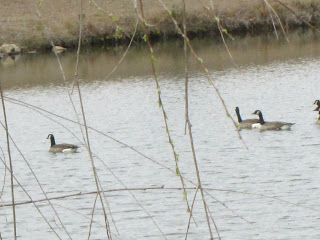 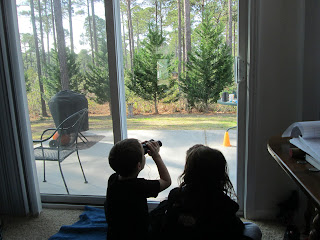 Back home for observations, we were joined by granddaughter Hannah and grandson Grayson, who had come over for "Pop-Pop Pancakes," my signature dish. These are the birds we spotted during a 45-minute period in varying numbers:

Hannah was the first to spot the Bluebird. At first she first thought it was a Blue Jay, but when it landed on the birdbath for a sip of water, there was no mistaking this beautiful little bird. I made a memo to myself that we've got to look into putting up some special Bluebird houses (such as we used to see along the Blue Ridge Parkway) to help these precious birds find lodging that is sheltered from intruders.

Later in the day, after our timed count, I spotted a Red-winged Blackbird on the feeder, a first as far as I know. He was quite a sight among the dozens of tiny Field Sparrows.

A side note: Today was my 8th re-birthday, the eighth anniversary of my life-altering heart surgery to replace my aortic valve and root. When my cardiologist in Northern Virginia, 'Doctor Siri," first explained to me what would have to be done, I thought to myself, "No way! -- there is no way they can do that" -- that is, replace a congenitally defective valve, and a whole aortic root that had become grossly enlarged over the years because of the leakage. But thanks to a superb surgeon, Dr Alan Speir, it was accomplished, and I was out of the hospital in five days, into Cardiac Rehab for 12 weeks, and then on my way.

Today, I appreciate all the blessings I have enjoyed over these past eight years, thanks to the Good Lord and his servants in the medical world. High among those blessings are my sweet and talented grandchildren -- Hannah and Grayson, who already have lots of athletic accomplishments as well as doing well in school, and Zoey out in Memphis, who, in an awesome accomplishment, has just won district-wide competitions in spelling, writing, and music, and will go on to the state meet next month.

If it is the Lord's will, I hope to remain physically active and mentally aware and be able to participate in family activities, walks with a loyal dog, and many more bird counts. If my total knee replacement in April goes well, I will have improved physical ability to do all that. If that's not in the cards, I hope to stay active and supportive in any event.