Staying on the Move With the Canines of My Life

As I have aged and needed my daily walking all the more, enthusiastic walking dogs have come into my life at just the right time. I don't know if that was providential, or just sheer good luck. Anyway, my current dog, Sadie the yellow lab/golden retriever mix, is the best walking companion I have ever had. You will see references to "Superdawg" in my blogposts. That's Sadie. She has been more than a walking buddy; she was my rehab nurse after my heart surgery several years ago. But that's another story.

Maybe dogs and I were always meant to be close. As faded old photos prove, I spent much of my first year of life crawling the sands of Savannah Beach with a big ol' white dog. I'm not sure of his/her name; "Whitey," most likely.

As a Park Service brat, I had "Dizzy," a fat and lazy Cocker Spaniel, as my first in-home dog. I was busy playing the Lone Ranger and riding my bike a couple of miles to my farm friends' spread, where we rode their farm horses, so I didn't really care that Dizzy was lazy. She was a good ol' sweet dog.

As years moved on, we had a succession of cute little dogs -- Bitsy and Smokey, the German Schnauzers, and Tiffany, the queen Yorkie and ruler of all she surveyed. I played with them, loved them, but they really were my Dear Wife's dogs -- totally loyal and beholden to her.

Then came Bandit, a perfect complement to Smokey. My wife fell for Bandit as a cute puppy in a litter at the home (as I recall it) of Susie the dog groomer. Bandit was part Collie, part German Shepherd -- a formidable mix, as it turned out.  I was just getting to the age that I needed to prove to myself that I was still athletic, so Bandit became my running partner. We used to run to a nice little park called Cheswick,  through the wooded trails, and then back home -- 3 miles every day without fail. Bandit was fiercely protective -- woe be unto anyone outside the family who would venture into the backyard unescorted. That was scary at times. But Bandit was a great dog. I don't think I ever cried harder than the day at the vet, when Bandit was old and very sick (indeed, terminally ill), that I patted his back and looked into his eyes for a final time as he went to his eternal rest, all his races done and done well.

As I approached the end of my newspaper career, and was about to embark on think-tanking and then free-lance writing, along came Sadie, whom my son Bobby had rescued from a nasty Richmond Pound. At first, she was Bobby's and Amanda's dog, but they were a young couple with a baby and then new homes on the way, so I became Sadie's custodian. A dozen years later, she is my dog completely, and no one dare try to reclaim her.

Sadie makes certain that I head out for a walk every single day. Often she decides which direction we take. We have our routes, and she alternates them, rarely doing the same one on back-to-back days. There is a special joy to have a companionable dog with you in your daily explorations of the great outdoors.

Besides that, Sadie and I have taken turns being each other's rehab nurses. After my heavy-duty (aortic valve and root replacement) heart surgery eight years ago, Sadie somehow understood that I couldn't take her on an outdoors walk. She stayed by my side day and night, and just went in the backyard when family members (mainly daughter Kristina, who kindly organized my meds and kept the house running)  let her out. Later, as I was able to start taking regular walks again, she never strained at the leash. She kept it gentle, as if she knew my sternum couldn't stand any ripping apart.

A few years later, I returned the favor for Sadie. We were in the car heading for a favorite spot on the Blue Ridge Parkway for a walk, when she jumped onto the front seat, and then only a few minutes later, some redneck pulled a pickup truck right in front of us. I had to slam on the brakes to avoid hitting him, but that threw Sadie sideways into the dashboard. She immediately began crying out in pain as I'd never heard her. We rushed her to an emergency vet, who diagnosed her as having a severely dislocated hip. He gave her pain meds, and then tied her rear leg up in a sling. He did not hold out much hope that she would survive. But I took Sadie out in the front yard of our Blue Ridge home for brief hobble-along walks whenever she needed, night or day. And she gradually got better and stronger. And now she's whole again, which I consider nothing short of a miracle. The prayers of family and many friends no doubt helped.

Now, I have a knee that may need replacement, and, if it does, I will need Sadie to be my best physical therapist again. No matter what, we will enjoy walking the beach, circling the lakes, watching gorgeous shorebirds take flight, and being witness to mighty storm systems as they start to gather force. 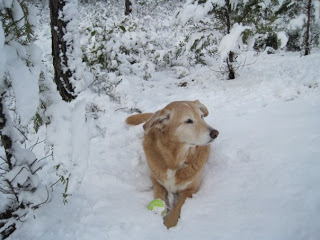 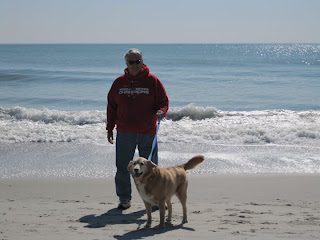 There is nothing like a loyal dog to keep your eyes focused and your feet moving.