Lately I have been worrying about sitting still so long while writing a complicated report as to let my joints ossify (or anyway get real stiff). I shouldn't have worried. Today I have the perfect remedy: Dasher the Wonder Dog (visiting for the day) and Sadie the Superdawg (the resident Queen Canine). A young yellow lab and a senior lab/golden mix, respectively, these two are sworn enemies of computer sloth. They will not let you stay glued to the tube all afternoon or evening. 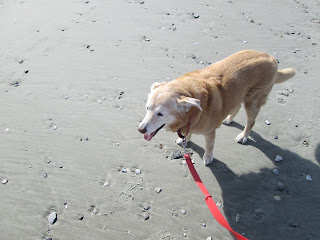 First, I had to run a few errands, so I loaded Superdawg into the car and after she scored a few treats at the bank drive-through, we headed for the beach. (There is no way I can handle both dogs at the same time.) We should do that more often, especially now that it is cool, and dogs can visit any time of the day, pre-tourist season. We saw a formation of pelicans scanning the waves for prey, a tiny puppy that ran circles around Sadie ("It's okay, Sadie, we were young once," I reassured her), and a bikini. Oops, I'm not supposed to notice those. As far as I know, they are not included in any Bird Counts.

I thought about taking Dasher to the Barc Parc (dog park) that he so greatly loves, but now the excitement of white smoke heralding a new Pope is on TV, and I can't ignore that. As his outdoor treat, I've taken Dasher out back and done long baseball toss with him. He has made my throwing arm so strong that I've thought of perfecting a knuckleball and trying out for a professional team. 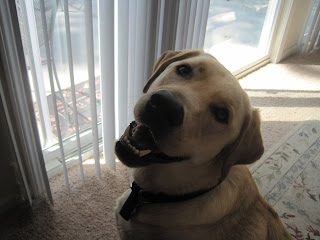 Really, is there any better personal trainer than a loyal dog? They will walk in any kind of weather. They will go chase a ball as long as you want to throw it. Thank goodness, though, Dasher has gotten out of the puppy behavior of whining at the back door every 5 minutes. Instead, he will just sit and stare at me working at the computer until I get up and take him out. Plus, (thank God) as he becomes a young adult, he has begun to discover the joy of an afternoon nap. So I am doing this blogpost while he peacefully slumbers.