The long-range weather forecast looks like something the Chamber of Commerce in a resort city would not want widely disseminated: rain is likely, sometimes heavy, through the coming weekend, with chances of more rain still fairly high throughout the following week. Today, we had a "record low high" temperature for an August 15 -- 70 degrees! That is phenomenal for South Carolina in mid-August. As far as all the rain, at least no one frets about a drought any more.

If a family has shelled out hard-earned money for a week's worth of sun and fun at the beach, this weird turn in the weather really stinks. I feel sorry for those folks. Here's hoping they have discovered some of the worthwhile indoor attractions, such as Ripley's Aquarium, Wonder Works, and Broadway at the Beach, among others.

For just an average dweller and dawgwalker, like me, the weather hasn't been that much of a bummer. The break from oppressive heat and humidity has been refreshing -- a triple-digit heat index with high dewpoints is not good for old dawgs or old dogs -- neither one navigates too well. To be sure, when the rain is heavy, it complicates Superdawg's business. Just to get her to empty her bladder this morning, I had to go out in the yard in a downpour with her and yell, "Go, Go, Go!" -- until she finally complied.

The rest of the morning Superdawg sulked because we hadn't gone for a walk, but about 2 p.m., the rain let up and we set off. Normally walking in the heat of the day in August would be a big no-no around here, but the coolness and cloud cover were protective. As sometimes happens when we walk on a day such as this, the rain steadily increased with each step we took. However, it never became a torrent. Rather, it was somewhere between mist and drizzle. We came back home damp, but not drenched -- and totally refreshed.

Hummingbirds were the real show today. The minuscule marvels were helicoptering, and darting, and dive-bombing all day long from early morning to dusk. Mostly they were engaged in internecine warfare.

We have three feeders fully filled with nectar lovingly prepared (four parts water to one part water) by Dear Wife, but every time a hummer began to sip nectar, another would zip in to chase him away with apparent intent of inflicting bodily injury with that super-long beak. Unfortunately, I do not have the ability to pick a hummingbird's brain, so I cannot explain their behavior. I read that they burn 12,000 calories a day (compare to 2,500 a day for the average human) -- but how can ingesting that much energy in the form of nectar and insects be a given when so much of the day is devoted to chasing each other?

I have lots of other questions, such as what happens if one hummingbird actually catches another hummingbird? Are there casualties or even fatalities as a result of the aerial warfare?

We were wondering why one pretty ruby-throated hummingbird kept veering off to the right, just out of our line of sight in the kitchen window, when there were no other feeders or flowers in that direction. At supper time, I took a wider-angle look and discovered that it was flitting to a perch on a wire cage we had placed around tomato plants. The hummer showed no interest whatever in the tomatoes (not even the red ones, the hummers' favorite color), but it just perched at the exactly same place on the top wire ring, before flying off, and then flying back. Sometimes it would linger there for a few minutes -- a period of stillness I'd never before seen in this bird. The best I can figure is that maybe the hummer was conserving some energy after expending so much in the day's skirmishes.

Because we saw more hummingbirds today than ever before -- four or five, best I could count the flighty creatures -- I also wondered if the cool, damp weather was pleasing to them. I have so many questions about them. 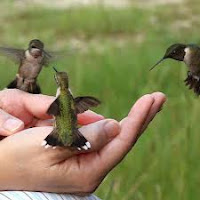 I understand that it is possible for them to become so accustomed to you that they will perch on your finger. If I ever establish that close a relationship, maybe I will just ask my hummingbird questions directly -- face to beak. It will probably happen on a cool rainy day when life is good, unless you are in a vacation rental.