When Security Weighs on a Walker's Mind

It has not been a good day for a care-free walk.

Late last night, I saw news reports that a robbery had occurred at a new McDonald's in the neighborhood, with the victims then pursuing the suspects by car down a main thoroughfare, ending in a crash at a community church, finally culminating in one of the pursuing victims being shot. Finally, police said they had apprehended two suspects, but they believed two others had fled, possibly into an adjoining neighborhood. Out came the police dogs trying to pick up a scent. The wounded victim was treated and released from the local hospital, thank goodness.

All this happened within a radius of a couple of miles from our home. It made for a restless night as I secured the house over and over again, and basically slept little as I pondered what action I would take if I heard someone trying to break in.

This morning, the local news media said two male suspects were still being sought. Nevertheless, Superdawg and I braved not only the rising temperature and humidity but the crime report to take a morning walk. A police cruiser came zipping down our road. I gave a friendly wave to the officer, thinking maybe the sight of an old man and his dog would bring a smile to his face. No way: He looked all business. I suppose the possibility of having to confront armed thugs would put any of us in a surly mood. God bless our first responders -- fire and police and other agencies. 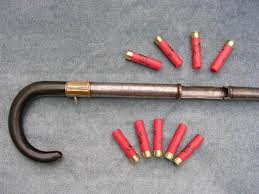 The woods looked a little darker than usual as we walked by it. No way was I going to follow Sadie's prompt to take the woodsy path this morning. I carried my cellphone in one hand in case I needed to make a quick emergency call. And I thought some about a walker's security.

I don't want to overdramatize the problem. Our community has been pretty tranquil on the whole. However, we don't live in a bubble. This region is dynamic and heavily visited. And as we know from watching the news, crime can rear its ugly head in the most unexpected of places.

Dwelling on security might seem contrary to the idea of walking to escape the woes of the world for 30 minutes or an hour or so. However, giving consideration to basic safety is surely a reasonable thing to do. I have a very sturdy walking stick that could help repel some creatures, human or otherwise. But of course it wouldn't normally be much help against a drawn gun. I have a bayonet that I used to carry on mountain hikes. Again, it might help in limited situations. 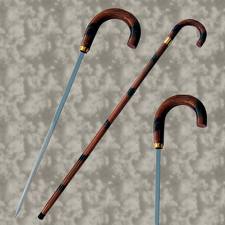 Protecting one's home is one thing, but would it be a good idea to train for a license to carry a concealed firearm on a walk? For the first time, I have started thinking about that. Not too long ago, I saw an online advertisement for a walking stick that somehow encases a rifle. I'm sure you would have to gain some kind of permit -- conceal/carry or otherwise -- to have such a lethal walking stick. Wow, though, could it ever surprise some thug who had concluded an old man and dog looked like easy prey. (Upon further review, there are dozens and maybe hundreds of online ads for canes that double as firearms or swords. So a lot of thought is being given, and there may be a market for walkers' protection.)

One thing I won't let happen is for fear to keep us homebound. We will keep on walking, and do so in as relaxed a manner as possible.

(A footnote: This encounter reportedly stemmed from the suspects advertising a car on Craigslist and the victims showing up with cash to purchase it. That should be another reminder to be very careful about executing transactions via Craigslist. Another odd note is that police tonight still have no IDs on the two suspects they and the media say are on the lam, and one begins to wonder if there were only the two thugs who already are under lock and key.)