The Uses of Visualization for a Grandfather 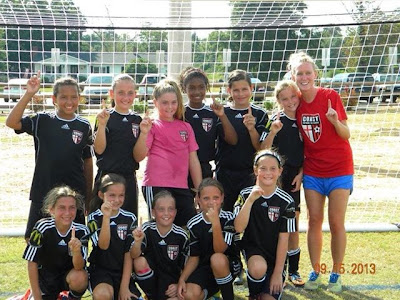 Does mental telepathy work? I couldn't travel to granddaughter Hannah's multi-state soccer tournament last weekend -- had to be keeper of the family dogs, and besides a long drive is still pretty hard on the surgically replaced knee. So as her team was winning one game after another against good competition from Virginia and the Carolinas, and finally reached the championship game Sunday afternoon, I started visualizing Hannah scoring the goal to win it all. She is the youngest player on a team of 11u's, but has really started coming into her own. She kicked a goal in Game One.

So as Game Four, the championship game, began some five hours away, I started envisioning Hannah getting an opening, kicking the ball hard, and right by the goalie for the winning goal. I thought about that real hard, and then I got a text message from my son: Team wins 1-0! Hannah kicks goal with less than a minute left in the game! My response: Wow! Wow! Wow! I'm told she and her teammates took it down the field, and Hannah was in position to take a shot, but she feigned a kick, which caused the goalie to shift a little in that direction, and Hannah then kicked it right through the space she had vacated.

While I dearly would have loved to have been there and participated in the pandemonium, I have the picture clearly fixed in my mind. After all, I visualized it before it happened.

In other happenings over the weekend, I walked for two consecutive days with my DW at the mall. No workout compares with that -- DW is a world-class shopper! And today I took her to a great lady doctor we have found for her in a senior health center some distance away -- a doctor who really listens to her concerns and discusses options. And you know what? -- I decided to transfer to the very same doctor myself. A great doctor is a treasure when you find one. Keep her or him when you can.