Sure Hope This Magnificent Bird Will Stay

Yesterday morning, I was greeted by a spectacular bird I hadn't seen since we moved to South Carolina in 2009 -- a Pileated Woodpecker, by far the largest of the many varieties of woodpeckers, with a wing span upwards of 28 inches. "Sam" (I'll call him) flew into the woods left to right making its typically loud, raucous noise, stopped to check out one dead tree, then was off again to parts unknown. His stay was too short to suit me.

When we lived near the Blue Ridge Parkway 12 miles outside Roanoke, a Pileated Woodpecker would  fly into our patch of woods at 11 every morning (you could set your clock by its arrival) and dominate the woodland choir with its series of loud wek notes, sometimes punctuated by a high-pitched kuk kuk keekeekeekeekeekeekeekee kuk (as described by The Sibley Guide to Birds.)

These are not just big but handsome birds with their flaming red crests and long chiseled bills. ("Pileated" is from a Latin word, pileatus, or "capped.") According to my Compact Guide to South Carolina Birds, a pair of these majestic woodpeckers "will spend up to six weeks excavating a large nest cavity in a dead or decaying tree." The hollow is large enough that Wood Ducks, owls, or even flying squirrels may later nest in these cavities after the Pileated Woodpeckers have abandoned them. 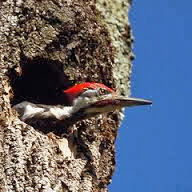 I sure hope "Sam" and a mate will settle on a dead tree out back in the nearby woods. I love to watch these guys soar, and make a fuss, and do their work. They prefer 100 acres of mature forest as their habitat. We sure had that in Blue Ridge and we might still eke it out here in coastal Carolina despite gradual suburbanization.

And yep, I am ready to focus more intently on Nature as Superdawg and I make our rounds after our baseball Redbirds went as far as they could go in the 2013 World Series. It was a great run but I am ready to watch the mama and papa redbirds that live out back and flit around our cedar trees looking for seeds we have thrown out to them. Life is good.