Birthday Plus a Lot of This and That

Usually I re-post Dawgwalker blogposts on Facebook in the thought that I might be writing about something of general interest -- a sighting of an unusual bird, for instance -- or at least a topic that my friends might like to review. However, I don't know if I will do that today or not. I mean I could write an essay on "How I Spent my 72nd Birthday." Wow, stop the presses (if print media still have those).

For the record, I did have a happy one on 11/11/13 with friends and family. Cards and presents for breakfast, led a Mended Hearts meeting at lunchtime, and had (with the local family) a fine dinner of good protein at Outback restaurant, one of my favorites. And there were hundreds of Happy Birthdays sent me by Facebook friends, one of the nicer features of our social networking age.

In addition, I took Superdawg for an extra walk in the late afternoon. We both enjoyed that immensely. Up until a year or two ago, we walked twice a day. I'm not sure quite why we cut back to one-a-day. The torrid South Carolina summers might have had something to do with that. Maybe with the start of cool weather, I should try to bestir both of us seniors to do two-a-days again.

During the walk, I saw a solitary Canada Goose flying with an incipient sunset as the backdrop, and I wondered if it was separated from its flock or headed for a nesting spot with other geese. But then I read my South Carolina bird book and picked up a hint that some of these magnificent birds may be loners. "Though a few migratory geese regularly visit South Carolina each year, many of our geese are resident, nonmigratory individuals and flocks." Individuals, hmmm. I need to do further research. I do read that Canada Geese mate for life (as do swans), and goslings stick with their parents for up to a full year, which is not typical in the bird world. Hmmm, I wonder if this was a guy goose on his way to a hot date. 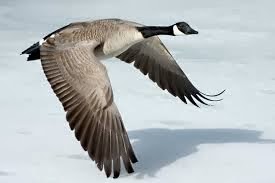 At my advanced age, my little black book that was filled a long time ago with the numbers of single ladies now contains contact information for GPs, cardiologists, podiatrists, dermatologists, hematologists, dentists, and other fine medical specialists. Oh well, the secret is to make the best of it, get to know the docs by inviting them to speak to our Mended Hearts support group, and pester the heck out of them by doing medical research online and presenting them with my finds.

Just randomly yesterday, I discovered that the average knee replacement lasts 10 years, and then needs to be replaced. Yikes, I don't recall my orthopedist explicitly telling me that, but oh well I probably couldn't have continued walking much longer without going bionic anyway. It's all good. Who knows if I will be able to put that 10 years of mileage on the knee that was replaced last April, but I am thinking if I take good care of it -- doing lots of exercise to forestall ossification -- maybe it could last longer than the norm. (Now, if the rest of Bionic Bob can last that long as well.)

As for birthdays, my favorite party of all time was the one my daughter-in-law Amanda arranged for me on my 70th. It was held in a large reserved room above a local restaurant, and the predominant color was Redbird red. The 11-11-11 party celebrated not only my No. 70 but the St. Louis Cardinals' 11th World Series championship, which had been just  been achieved in one of the most exciting October classics ever. We enjoyed steak and a delicious cake decorated in Cardinals colors and logo. 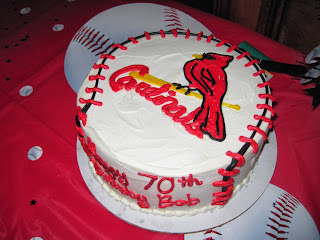 Maybe a target for the next big party would be a celebration of three-quarters of a century in 2016. That would be shortly after the next Presidential election (no comment here on that), and hopefully the Redbirds could cooperate by winning another World Series that year. A Cardinals collar for Superdawg was one of my birthday presents yesterday, so we are on the way (cue up Willie Nelson's "On the Road Again").