Walking Into the Teeth of Winter

It was 77 degrees (F) here yesterday afternoon. As pleasant as that weather was, it had the unfortunate effect of making us complacent as we started our morning walk today.

As Superdawg and I set out, conditions were overcast, but still balmy. However, as we reached the mid-point of our walk and started back home, a light mist turned to steady drizzle. And then we felt the cold front that had brought snow and ice to parts of the Midwest and Upper South starting to sweep into our neighborhood.

As we got wetter and colder, a lot colder, it occurred to me that this is the way you can get yourself in trouble when walking in the winter, even in South Carolina. Luckily we had less than a mile to walk in the cold, and wetness, and wind, but had we been farther away we (or at least I) might have risked hypothermia, a dangerous lowering of the body temperature.

My lesson learned: Even when starting in fairly warm weather, take at least a light jacket, perhaps in a backpack with a protein-rich snack and a bottle of water, when doing a wintertime hike.

I'm sure too much cold rain could adversely affect sweet old Sadie the Superdawg, too, but she again proved how hardy she is over the Thanksgiving weekend. After the big day of feasting, she became seriously lethargic -- drinking no water, eating no food, and standing up only occasionally and with great difficulty. My first thought was that she had eaten too many Thanksgiving table treats; however, she showed no signs of stomach distress. When we finally got her outside, she staggered off to the woods and just curled up in the bushes, as though she had gone there for a final resting place. That scared me, given that she has reached the average lifespan, about 12 years, for a dog of her breed. 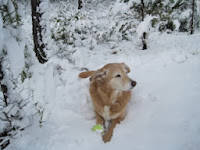 The next day, my son discovered something I should have noticed. A tick had burrowed into the top of her head and has extracted considerable blood. I hadn't even thought about ticks being a menace in December; however, I had put the routine flea and tick repellent on her just a few days earlier. My son extracted this vile creature, making sure to get its head out too, and soon thereafter Sadie began to perk up. I knew ticks could transmit diseases, but did not know one could have this kind of transitory effect on a dog. And of course maybe it wasn't the cause of her lethargy; maybe something else was bothering her. Anyway, it is great to have Sadie now back to being my daily walking companion. 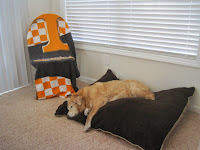 My son and wife have both occasionally asked me, in so many words, "You know, one day Sadie will leave us, don't you?" I suppose I do, yet I hope she will go far beyond the normal life expectancy for a lab or retriever. And in a way, I think her spirit will never leave me. We are inseparable.