Beauty and the Beastly in Nature

With the heavy rains having cleared out, this morning absolutely sparkled -- blue clouds with only a few wispy clouds, lowered humidity, and an inviting fresh breeze. Superdawg was up for a long walk, and in fact when we got home and I dropped the leash to let her retreat to the front door as she usually does, she tried to head off for a second walk. I felt good, but not up for another two miles.

We've seen much in the world of Nature during the rainy day and now the spectacularly sunny one. During the rain, our resident Ruby-Throated Hummingbird -- ever the peripatetic creature -- continued to buzz in and hover at the nectar for a feeding every 10 to 15 minutes, then returning to its perch out in the woods. I am more convinced than ever that this is our only hummer this season, because no others come in to compete for the nectar. In seasons past, three or four have waged territorial battles at every feeder. 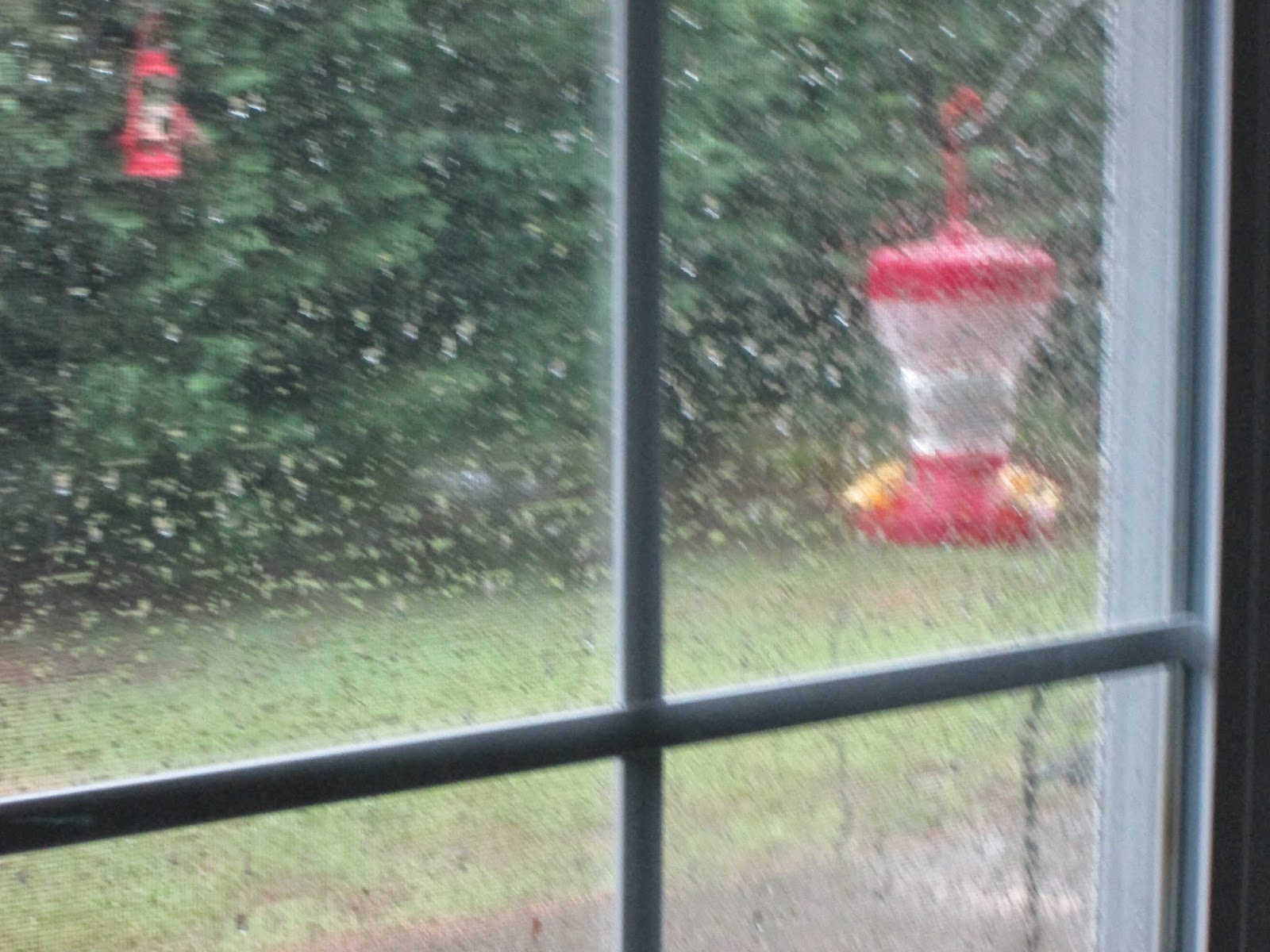 Through the raindrops, I tried to take a photo through a window of the Ruby's feeding, but the tiny guy was elusive. I did get a shot of the nectar feeder with raindrops on the window resembling snowflakes, and a Cardinal in the distance on the lantern-shaped feeder. This morning, I had a much funnier critter dominating the feeder -- not a feathered, but a furry one: the persistent squirrel. My policy is to let this guy have a go at gleaning a reasonable share of the sunflower seed and other goodies. He can't get great gobs of it at once, because the bulk is in a bin, from which the birds produce a trickle with their pecking. The squirrel's contortions are entertaining, and, heck, these cute rodents need nourishment too, right? When I think he's had enough, I simply open the door and he jumps off, sometimes with ol' Sadie chasing him up a tree. 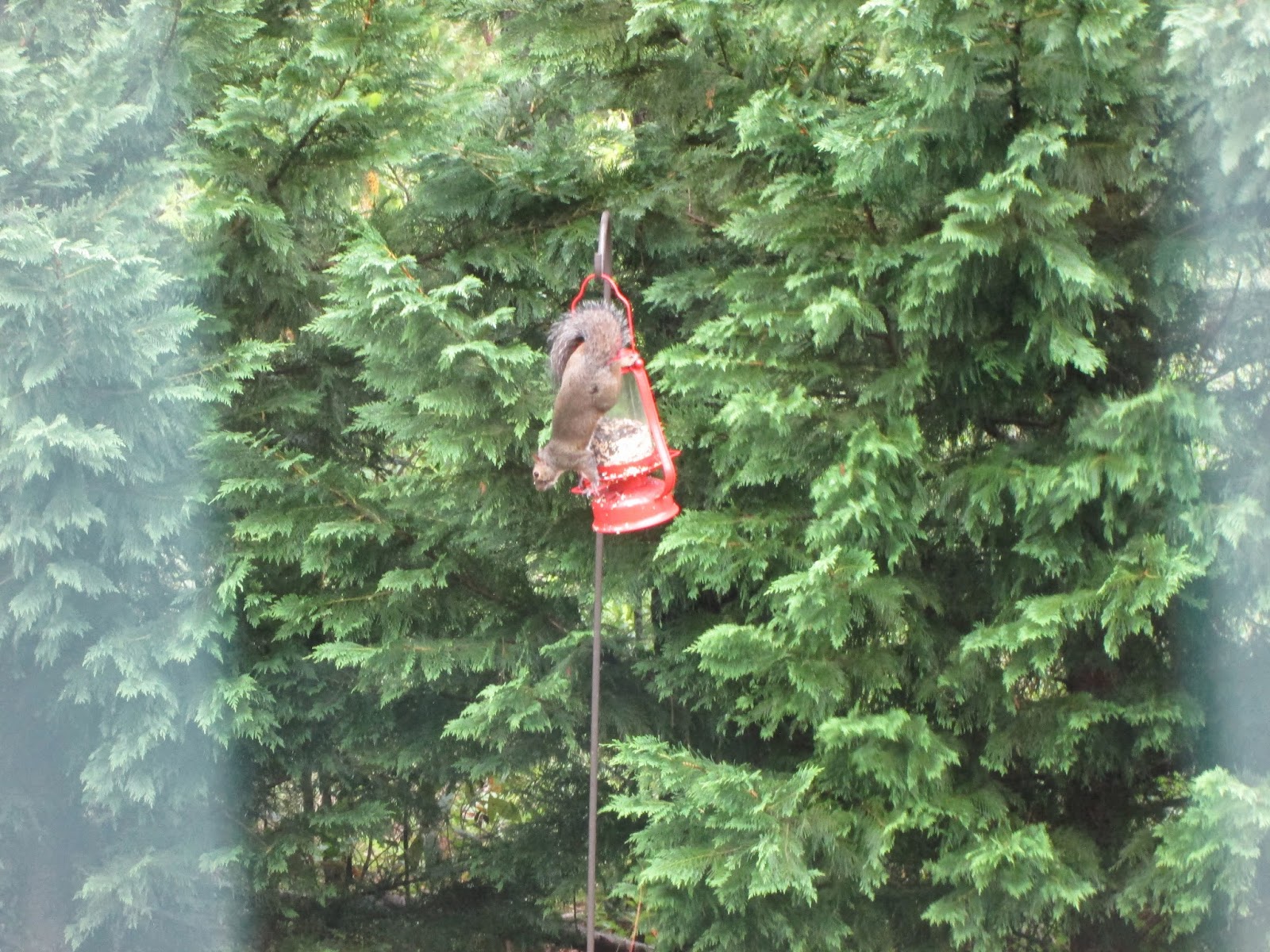 On our walk, we encountered a sad scene. I heard Mockingbirds making their most menacing sounds and then saw them dive-bombing a leafy area high in an oak tree. Then I saw the object of their wrath -- a very large bird; what appeared to me to be either a Red-Tailed or Red-Shoulder Hawk. Clearly the Hawk was preying on the Mockingbirds' nests, and they were courageously defending it.

It is hardly ever a good idea for a human to interfere when the Laws of Nature are being carried out. I would never throw a stone at this Hawk doing what birds of prey do; nor, God forbid, would I whip out a gun and shoot it. But since my wife and I have a special relationship with Mockingbirds (a controversy over a dumb-ass school board's attempted banning of "To Kill a Mockingbird" brought us together), I tried to encourage the Hawk to fly away by shaking my walking stick at it, and then tapping my walking stick loudly on a fence. The big bird stared down at me with utter contempt, as if to say, "Old man, I could claw and peck your eyes right out of your head."

It was too late anyway. The Hawk had already torn the nest to shreds, and no doubt made the lives of the little Mockingbirds very short. The Mockers no doubt will put some dents in him before he's finished, and no doubt they will follow him and keeping getting in their shots as he flies away. It is all Nature's way, and I must say my observations indicate there is no shortage whatsoever of Mockingbirds, thank goodness. I love those birds.

So into every absolutely gorgeous day must come a little sadness, I suppose. We move on with our trusty walking sticks and wait for the next great adventure.