So far this spring, I haven't seem hummingbirds buzz and chase each other off our feeder. Evidently, we have just one regular -- a ruby-throated beauty whose ruby marking stands out like a rare gem. I have watched him zero in, take a few licks of the nectar while in static flight, then whoosh back out into the woods somewhere, then to return usually in 5 to 10 minutes.

This morning, I managed to keep my eye on Mr. Ruby returning to the forest and saw him perch for quite a while on a very small pine branch.  By consulting a fine book by Erik Hanson, "World of Hummingbirds" (Stackpole Press,  2009), I found this was not uncommon behavior for a ruby-throated hummingbird. They frequently do rest  between nectar feedings to consolidate their carb intake; they are not always in motion (though they do, amazingly, fly the 500 or so miles over the Gulf of Mexico in migration without stopping!).

While I was trying to snap some photos of this tiny guy on the patio, an encounter with Mr. Ruby delighted my granddaughter. I daydreamed for a few seconds, only to be awakened by the sound of powerful wings beating 100 mph right in front of me, inches away! Hummers are attracted by the color red, and without thinking about that, I was wearing a bright red shirt. Mr. Ruby had mistaken me for a feeder. My grandchild said I squealed like, well, a little girl. We agreed that if we had caught all this on video, we would have a million hits by now on YouTube. 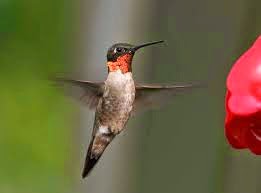 In the Hanson book, I also found an answer to a question I had raised in my post last September 4 about "peripatetic hummers and pesky wasps." Can wasps sting hummingbirds? The answer is yes. Hummers have relatively few predators; however, spiderwebs can snag some of the smaller ones. In addition, researchers "have reported that hummingbirds can be eaten by frogs, praying mantises, and perhaps most surprisingly and atypically, bass. Hummingbirds may also be stung and killed by wasps, some spiders, such as the whip spider, or tailless whip scorpions."

So there you have it: Wasps can sting and kill hummingbirds. So if wasps again try to move in on Mr. Ruby's feeder, I will do my best to swat them away, and clean and move the feeder to keep it reserved (as best I can) for our resident hummer.