Almost a Hurricane and Churning up the Coast

Few things concentrate your attention more than a steadily strengthening tropical storm that is on the verge of becoming a hurricane. If it doesn't command your interest, it should.

From our morning walk and through the day, Tropical Storm Arthur was on our minds. On the morning walk, we observed clouds scurrying up the coast from the south, where the storm has been brewing off the coast of Florida. The humidity was absolutely oppressive -- so much so that Sadie the Superdawg wanted to cut short the walk and get back in the car to be transported back to the air-conditioned house. She is no dumb dog! We had driven to a fairly shaded spot to try to beat the heat, but it didn't help much in these tropical conditions.

As of 8 o'clock tonight, the National Hurricane Center was reporting that Arthur has sustained winds of 70 mph, with higher gusts. Furthermore: "Strengthening is forecast . . . and Arthur is expected to become a hurricane tonight or Thursday . . . Tropical-storm force winds extend outward 80 miles…." According to our local weather report, the track has edged a little closer to the coast, so currently it is expected to pass as close as 50 miles from Myrtle Beach tomorrow afternoon. 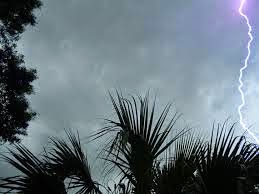 The forecast is that Arthur will take a turn toward the north tonight and tomorrow, which would take it very close to North Carolina's Outer Banks, if not right over it. However, the National Hurricane Center's report acknowledged the possibility of a "deviation of the forecast track to the left " Such a sight turn, "or an increase in the forecast size of Arthur would require the issuance of hurricane warnings for all or part of the hurricane watch area." No doubt our local Chamber of Commerce is hoping that scenario doesn't play out, because it would put a real damper on Fourth of July tourist activity here along the Grand Strand. But I have been around long enough to know how these tropical systems can be, well, rather temperamental, and change their minds and make all sorts of unexpected turns Maybe that is why we used to name them all for women -- just kidding!

So we bought a bunch of bottled water that was on sale at the Dollar Store, not so much expecting the full brunt of this storm but by way of starting to prepare for bigger ones that may come our way between now and November. The way Arthur has brewed up so quickly right off the Atlantic coast may mean that we won't have all that much time to prepare the next time a 2014 storm qualifies for its own name.

Do names make a difference? Arthur doesn't sound all that scary to me. And I remember how in 1985 we were staying on Hatteras Island and virtually laughed at Hurricane Bob as it went by to our west. It did wind up hitting our then-hometown of Richmond fairly hard, though, and knocked out a Richmond Braves game.

We will follow what happens here with Arthur and report again tomorrow.