Question: When can a walking stick be your worst enemy (or anyway your second worst)?

Answer: When a policeman who has pulled you over after nightfall for a traffic violation mistakes the stick for a shotgun and fires six shots at you.

That scenario infamously played out last March near Charlotte when a 24-year-old South Carolina deputy shot a 70-year-old Vietnam vet from North Carolina.

This hits uncomfortably close to home for this septuagenarian who cherishes his custom-made walking sticks and who implores via his senior-fitness blog, "Walking Stick, Don't Fail Me Now."

Maybe I should have a subtitle, "Walking Stick, Don't Fool the Cops."

Just the other day, prosecutors cleared Deputy Terrance Knox of any wrongdoing, on the grounds that he had reason to fear -- operating as he was in the darkness with the need to make a split-second decision -- that a walking stick suddenly pointed at him was a deadly weapon.

The news stories say (and videos show) that Vietnam vet Bobby Canipe got out of his pickup truck after being stopped by the officer for having an expired tag. Canipe turned back to the bed of his pickup without acknowledging Knox's calling out "Sir!" three times, and pulled out a long slender object with its tip pointed at the officer. (Is it possible a hearing handicap figured into all this? The stories don't say.)

At that point, the officer was a model of contrition, rushing to the fallen vet, starting first aid, repeatedly saying how sorry he was, and then sobbing when fellow officers arrived and swearing that he had thought he was facing a shotgun.

Thank God, the wounded veteran survived all this. It is not my nature to second-guess the men and women of our police forces. They do dangerous work to protect the law-abiding from the lawless, and do their jobs without a high level of pay. I do wonder if a warning shot and stern command might have been sufficient -- but then I didn't have a weapon-shaped object pointed at me in the dead of the night.

I think those of us who pack walking sticks can draw our own lessons. If stopped by an officer, stay in your vehicle until asked to get out. If you do step out, don't reach back into the seat or truck bed for your walking stick without saying that's what you're getting, and then exhibiting it to the officer in a neutral, non-threatening manner.

Looking beyond this incident, there are times when it can be a good thing that random civilians mistake your trusty walking stick for a weapon. On the few occasions I have had some mild drive-by harassment from teens who deserve to have their licenses revoked, I have clasped my walking stick more tightly and thought about what I would do if they got out of their car and rushed us. Particularly good to have in hand on such an occasion would be my stick carved from a Carolina Hawthorn bush. That sucker is thicker than the handle of a Louisville Slugger and nearly as thick as the barrel. A whap upside the head would leave a nasty knot. It came in handy as deterrence once when a mean dog charged Superdawg and me. Sweet ol' Sadie making a rare display of her fangs reinforced the message sent by the Hawthorn being repeatedly slammed in the ground, and the beast turned tail. 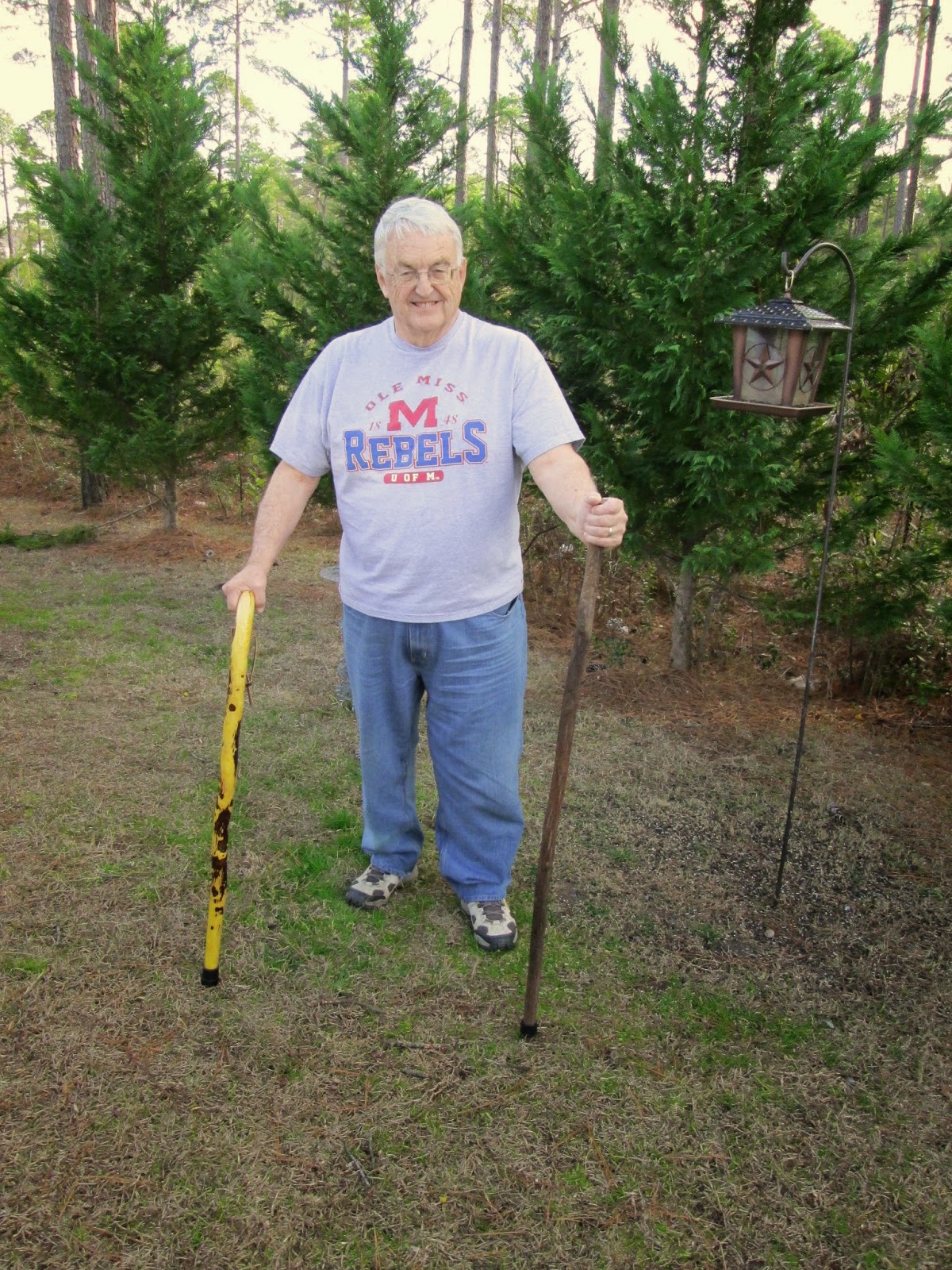 So I conclude with the flip side of my opener:

Question: When can your walking stick be your best friend?

Answer: When bad guys assume it is a weapon.

Postscript: It actually can be a lethal weapon. There are companies that market rifles or shotguns built into walking canes. Never, never point one at a police officer, but if you walk in a bad neighborhood, consider sporting one after securing your conceal/carry permit.