Once again, we have a few days' break from oppressive humidity, and so Superdawg wasn't about to let me waste an opportunity. After supper, she broke out in her most insistent "Walk Me!" bark and so she was not to be denied. And on our walk, she would not content herself with one of our normal routes. She kept adding on blocks.

It was a delightful preview of autumn, one that won't last long, according to the weather forecasts. So while grabbing quick walks next week before the daily heat index tops 100F, I will at least start giving thought to some fine meditative walks with Nature for Superdawg and me during the coming fall. In keeping with that objective, I recently acquired from a discounted book grab a truly amazing book, "On Looking: Eleven Walks with Expert Eyes," by Alexandra Horowitz (Scribner, 2013).

Ms. Horowitz writes simply (but profoundly) about fully seeing virtually everything in your surroundings while you are out on a walk. Her powers of perception are impressive; however, for this book she went on walks with all manner of experts -- an urban sociologist, sound designer, physician, geologist and other specialists -- just to discover how much she herself had been missing on her treks. And of course she has learned much from her most frequent walking companions -- her dogs. In that connection,  I was pleased to discover that an earlier book of hers based on those walks, "Inside of a Dog: What Dogs See, Smell, and Know," achieved the status of New York Times bestseller. She certainly has impressive credentials for comprehending what sages like my Sadie dog are thinking. The blurb says she "teaches psychology, animal behavior, and canine cognition at Barnard College, Columbia University." I never knew such a discipline existed, but far be it from me to doubt its legitimacy or usefulness.

My homework is to acquire a copy of "Inside a Dog," and use it to sharpen my senses on those coming fall and winter walks. It should be a prime source of quotes. Her writing style is richly descriptive. For now, here are a few relevant excerpts from "On Looking":

"It was my dog who prompted me to consider that these daily journeys could be done . . . better. Bring a well-furred, wide-eyed, sharp-nosed dog into your life, and suddenly you find yourself taking a lot of walks. Walks around the block, in particular . . . . But what counted as a "block" was changeable. Heading out for what I imagined would be a quick circumnavigation, I often found myself led elsewhere by my dog: our "blocks" have become tours of city parks, zigzagging meanders through canyons, trots along the side of highways, and, when we were lucky, down narrow forest paths."

After some clashes with her dog over walking directions (and can I ever identify with that!), Alexandra said she discovered "I was paying so little attention to most of what was right before us that I had become a sleepwalker on the sidewalk. What I saw and attended to was exactly what I expected to see; what my dog showed me was that my attention invited along attention's companion: inattention to everything else." And what were her discoveries? There are hundreds, but as one example she found that a familiar building in her New York neighborhood had a bottom story largely covered with "sea sediment, shells, ancient fossils . . . I'd lived in this building for six years and never had noticed the population of sea creatures resting by the entryway."

Her writings provide inspiration for practicing heightened sensitivity on our coming walks. Living near the South Carolina coast, we should have no trouble topping her find of sea creatures once the tourists have departed. 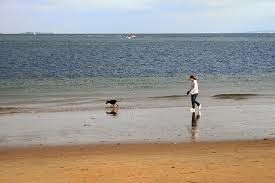