Exploring the Gibraltar of the South

Today the Missus and I took a journey back to 1861-65 after crossing the Cape Fear River from Southport, NC via a ferry, and then exploring the earthen works of Fort Fisher, the Confederate redoubt that played a pivotal role in the Civil War. The mile-and-a-half of connected batteries of 47 heavy cannons succeeded in protecting the Rebel blockade runners for most of the war, thereby keeping the Port of Wilmington operating while all other Southern ports were falling under Federal control.

Disregarding our age and infirmities, the Missus led our charge up the sandy cliff of the Buchanan Battery, while I was yelling practically every step, "Stop, wait, you're going to fall down! How are we going to get back down this thing?" Never mind, the Missus (true to her status as a charter member of the Fort Randall Chapter of the United Daughters of the Confederacy) forged on, and with the aid of our walking sticks we finally reached the summit where we could take in the splendid view the Confederate artillerymen had when Federal ships dared sail on their waters. We were also relieved to find a more gently sloped trail down the back of the Battery to make our exit much less perilous. 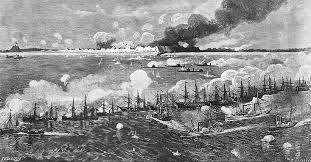 General Ulysses S. Grant and the Lincoln Administration realized full well the strategic advantage that batteries like Buchanan within Fort Fisher gave the Confederate blockade runners.(Fort Fisher was called, with reason, the "Gibraltar of the South.")  In December, 1864, the Feds sent a Army-Navy-Marine combined force to take Fort Fisher, but the Southern forces repelled it. Undeterred, the Federal force returned on January 12, 1865 and unleashed what was at the time the largest bombardment and amphibious campaign in U.S. history -- hurling some 3 million pounds of navy projectiles against the fort. Then the Federal force of 10,000 attacked the fort defended by just 2,500 Confederates. After eight hours of bloody, sometimes hand-to-hand combat, and almost 4,00 casualties, Fort Fisher finally fell. General Robert E. Lee once had observed that if Fort Fisher were to be lost, he would not be able to maintain his army and the cause would be lost. Sure enough, surrender at Appomattox came within three months of Fort Fisher's fall.

It was a privilege to walk up and down this hallowed ground where so many brave men gave their lives. One sight that will stick in our mind is that of gnarled trees that seem to be telling the story (though of course they do not date all the way back to the Civil War). They look to be expressing the pervasive agony, though tropical storms and nor'easters disfigured them, not bombs and bayonets. I will post their pictures when we return to South Carolina tomorrow.

Tonight I feel more fatigue and soreness than any gym workout has given me in a while, but I also have the satisfaction of learning more about a critical juncture in our national history. I confess I had barely heard of Fort Fisher before today's adventure. Now I know it rather well.