Fisherbird & Friends Own the Pond

Birdwatching was rather slow around here for the Great Backyard Bird Count (Feb. 13-16). Unusually cold weather had an impact, as well as (alas!) the loss of some woodland to new development in the neighborhood.

Ah, but one constant remained: the lone Double-crested Cormorant that kept vigil at the nearby pond. I counted that funny-looking bird each day of the GBBC. It can be found most any time of the day mid-pond on the structure that houses the fountain the homeowners association occasionally runs to refresh the water. Of course, it seeks another perch when the fountain runs, but promptly returns to its personal fishing pier. 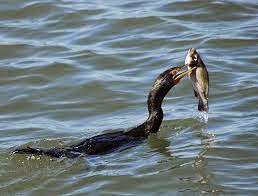 Within the past two days, Solitary Cormorant has gained a lot of company. There are now five adult Cormorants jockeying for the fishing post, and a least a dozen of what appear to be kid Cormorants swimming around the pond. They are joined only by a Snowy Egret nervously occupying a corner of the shoreline. No duck dare splash-land there right now.

I have no idea if the newcomers are the result of migration or procreation or just are on a recreational outing, but I am charging up my camera tonight so that I can try to take their picture tomorrow. They are quite a sight. Until we moved to coastal Carolina, I had never seen one of these creatures in action, diving as they do below the water's surface and staying there for minutes, until resurfacing with a juicy fish as the big prize. Who knew there was a diving bird with such a mastery of the underwater world? 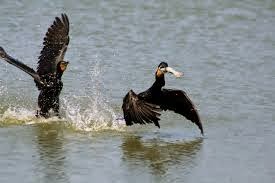 It is doubtful our little pond has enough fish to keep this crew occupied for long, but when the flock (if that's what it is) departs, I hope Solitary Cormorant stays put. Superdawg and I have grown accustomed to paying respects to the guy every day on our walks. It is good to have some certainty in Nature along with all the surprises.