Back to the Future or Back for the Future? No Sure Things, Lots of Questions

Follow an old guy's blog and you most likely will be encountering reports of aches and pains. Hey, the joy is in the journey, and finding ways to overcome. Work hard at it, and most likely you can.

This old guy has detailed some of his medical adventures with heart and knee. Both are ticking and clicking reasonably well now. (Knock on wood.) But the problem area that has persisted through it all is the back -- specifically, something called spinal stenosis.

SS showed up almost simultaneously with Social Security, and in retrospect that wasn't really surprising, because it is an ailment often associated with the aging process, frequently making your acquaintance around age 60 (though some people do have it from birth). Briefly stated, spinal stenosis is a narrowing of the spinal canal, which is the aperture through which lumbar nerves pass. And as this canal becomes too narrow as a result of wear and tear, your lower back hurts like hell when you are standing or walking, and that pain can radiate down one or both legs. The pain usually eases when you sit or lie down, or when you lean forward as in pushing a grocery cart. Rest a while, get back upright and moving (or just standing in one place), and the pain returns. 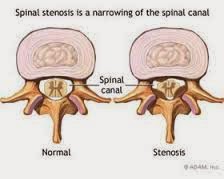 This condition has not added to the enjoyment of my Superdawg walks over the past decade, but we have both toughed it out to this day and relished the walks nonetheless.

SS hit me like a ton of bricks after I had made a late-career move from the newspaper to an Inside-the-Beltway think tank. I had enjoyed the long uphill walks from the Metro Station to my office, until I began to notice that I couldn't walk a block without having to sit down and rest until the pain subsided. It got so bad I thought about not only sitting but crying.  For a while I rationalized that maybe I had just gotten out of shape during the change of jobs and homes. However, my doctor referred me to a back specialist and thus began my introduction to spinal stenosis.

We did a nice "open" MRI (not all entombed) in suburban Maryland while watching the baseball movie "The Natural." The doc said I had a "moderate" level of spinal stenosis and he talked surgical options down the road. I went to a pain management specialist and received an epidural, which helped little and freaked me out greatly. (My sympathies to women who have this in child-bearing.) Finally, I got a prescription for physical therapy and found a PT angel named Michele who helped me greatly with aqua and gym therapy, stretching exercises, and pep talks about losing weight. I will always remember her tears of joy and big hug when I told her that her PT had enabled me to dance at my  daughter's wedding.  (I think she now owns her own PT establishment in the DC area, and if you want a recommendation, you can direct-message me.)

For a few years, spinal stenosis seemed more manageable; however, it conspired with my bad left knee to make walking more challenging in the Blue Ridge Mountains and then along the Carolina coast as semi-retirement proceeded. Always we continued walking, me and my Superdawg. The knee issue improved after my total replacement two years ago. But the spinal stenosis did not. New rounds of PT didn't help much though providing good workouts; and 30 chiropractic adjustments offered only fleeting relief.

Enter now the opportunity to participate in a clinical trial of a new minimally invasive procedure for overcoming SS. We live in one of 18 places around the country where this trial will happen. I have received preliminary notification that I qualify. This procedure (which I am not going to name until I have more information as well as permission) has the FDA's seal of approval, but is not yet cleared for coverage by Medicare and private insurance. (The costs of participants' time and medical expenses would be covered.) Locally, the trial will be conducted via a reputable pain and spine practice. 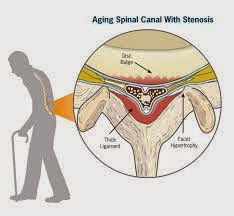 Basically, the procedure entails insertion of a dime-sized-diameter tube containing specialized instruments that (with the aid of imaging) remove tissue and bone that are compressing the spinal nerves. It is said that many patients can return home the same day, without need of the general anesthesia and hospitalization that are typical with full-bore lumbar decompression surgery. If I decide to go through with this one- to two-year trial, I will blog in considerable detail. For now, I have about a hundred questions, beginning with how many of these have been performed (sans Medicare) and what have been the results? What are the credentials of the surgeon in the local clinical trial? What is the expected recovery time? If the procedure goes wrong, am I on the hook for a follow-up full surgery?

Late breaking update: After doing further Web-surfing tonight, I have a whole new set of questions. I managed to gain access to the lengthy Medicare review of the proposal for a controlled study, and found indications that it might set up with one group of patients receiving something other than the surgical procedure, with analysis then made as to whether a placebo effect occurred. Some commentary even mentioned the possibility of "randomized controlled trials with surgery or sham as a comparator." Sham? -- I suppose you wouldn't know until the study had been completed, right? The government reviewer did point out that recipients of a "sham procedure" would receive "other therapies for their pain so they would not be without treatment."

Sham? -- Wow! I suppose if you agree to be a subject in an experiment, you expose yourself to a risk of deception, not to mention the assorted medical risks. And I suppose if I raise this issue going forward, I will be disqualified. No smart-alecky old investigative reporters allowed.

Oh well. Taking any action to battle spinal stenosis does come down to weighing rewards and risks. Ultimately, what is life but a risk? I hate the thought of having to rely on a walker or wheelchair or even being bed-ridden in my final years on this Earth. The knee operation was a risk -- one that came with a reward, a pain-free knee good for walking.

It is a high priority of mine to stay active, keep on those trails. But is an experimental surgical procedure as part of a randomized study the best way to proceed? I have a lot of doubts now, at the end of the day. Maybe it's time to go back to aqua therapy, stretching, exercise machines, losing weight, or even trying pain shots if it comes to that.