The Sun Is High and the Heat Is On

My calendar told me yesterday, Sunday, that summer starts Sunday, June 21, which is also Father's Day. All that is next weekend, so why do we have summer weather with a vengeance right now?

When I stepped out the door at 6 p.m. last night, the temperature was still 94 F. At midnight, it still lingered in the 80s with oppressive humidity. By Wednesday, the thermometer will be flirting with 100 F and the TV weather people will be adding to our misery by calculating a heat index of around 110 F. That is the day I will be having an echocardiogram at my cardiologist's office. If my heart's on fire, maybe they will call the Fire Department. I am just hoping my technician won't be named Elvira (as in the lyric from the Oak Ridge Boys' tune -- "My heart's on fire for Elvira.")

Of course, the calendar does not control the start and ending of a heat wave (which is officially defined as three consecutive days of temps over 90 F -- our forecast is for about a week's hot spell). It is that big ridge of high pressure -- a Bermuda High -- off the South Carolina coast that is controlling. It is sucking up heat and humidity and distributing it clockwise throughout the southeast and mid-Atlantic. The folks in D.C., Baltimore, and Philly are griping, as though they know what real heat is. 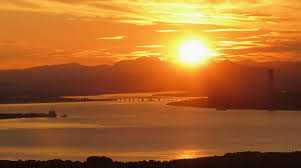 The summer solstice does arrive this coming Sunday. A solstice is an astronomical event that occurs twice a year as the sun reaches either its highest (June) or lowest (December) point in relation to the celestial equator. Simplified, what that means to me is that June 21 will be the "longest" day of the year in terms of hours of sunlight.

A British publication, The Independent, had a fascinating Sunday feature yesterday on three exciting ways that some adventurous souls advocated for celebrating 16 hours of sunshine on this June's solstice.

A Danish chef, Trine Hahnemann, presented a delightful picture of feasting for the solstice, with such in-season delicacies as strawberries and the first new potatoes at the center.  She cooks a big roast -- always lamb -- for her crowd, and along with strawberries and cream plus the likes of sausages, cabbage, and shrimp -- all eaten on the beach, with a bonfire later that night and singing through the evening.

Another way chosen by some super-energetic types is a 100-mile bicycle ride on the South Downs Way Trail from dawn to dusk, complete with 12,600 feet of climbing. You pass numerous pubs but don't have time to enjoy them if you are earnest about finishing before sunset. So I would say you have to be not only a well-conditioned athlete but something of a masochist to attempt this one -- especially if you tried it during a heat wave in the American South.

A wilderness author, Phoebe Smith, wrote movingly of her ideal solstice spent sleeping out on a mountaintop: "There's something magical about sleeping in the wild on the summer solstice. To watch the sun descend beneath the horizon, warming your face with the last of its heat, while you sit snug in your sleeping bag, the earthy aroma of your soil mattress filling your nostrils, waiting for the surrounding landscape to fade into the darkening sky. That's the dream, anyway -- and one I have endeavored to realize for the past three years, every summer solstice eve, on a very special Scottish mountain called Ben Hope." (Her latest book is "Wild Nights: Camping Britain's Extremes.")

Maybe I move in the wrong circles, but I've never done a solstice celebration on this side of the pond. Maybe we save it all for the Fourth of July. Of the options presented, I prefer the idea of having a big feast on the beach, although if the heat wave passes, ol' Sadie Superdawg can join me in a solstice walk as well in celebration of God's marvelous creation we call Nature.