Set Your Own Honey-Do Scale

It was in a light-hearted spirit that I wrote "Running the Honey-Do Marathon" in this space the first of August. I was imagining a fitness system that would award me points for taking my wife mall shopping, or performing other chores instead of taking a walk or riding an exercise bike.

Fanciful though my intentions were, I realized when I had finished the piece -- and particularly when I began getting responses -- that I had stumbled onto something.

Some folks actually wanted a fully developed point system for doing exercise that isn't usually called  exercise, such as weeding a garden, scrubbing the floors, or Christmas shopping.

Why not? Why should leisurely or work activities not count toward our exercise goals?

When I wrote the article, I was just pulling points for assorted honey-do chores off the top on my head, with no scientific backing. But now I have discovered from a book entitled Fitness Over Fifty (Healthy Living Books, 2006) that there already exists something called the Borg Category Rating Scale (named for its creator, Swedish scientist Gunnar Borg) to help measure the effort each person perceives he or she is putting into varied activities.

Amazingly, my first stab at devising points matched up pretty well with the Borg Scale. These are some of the points I figured were about right, based on how hard I felt I was working:

Going to the Farmers' Market and toting heavy produce back to the car: 5 points

Parking at the back of a strip-mall lot and walking to Family Dollar, a DW fav: 3 points

Walking to a Starbucks in the middle of a large mall while DW shops at upscale store: 10 points

Deduction for having a scone with my non-fat latte: minus 5 points

Okay, so you probably can detect my attempt at humor in some of these, and yet, and yet. . .

The point system is not that far from the Borg Scale, which runs from 6 for least effort to 20 for hardest, maximum effort.

Here is the Borg Scale provided by Google Images: 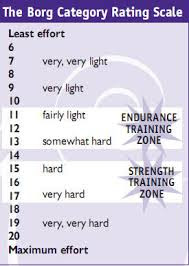 (Further information in "Fitness Over Fifty," An Exercise Guide from the National Institute on Aging, Healthy Living Books, 2006)

The numbers don't correspond to time or repetitions but are a way to estimate how hard you are working -- or how hard you need to work to challenge yourself. Here is how the guidebook tells it: "For endurance activities, you should gradually work your way up to level 13 -- the feeling that you are working at a somewhat hard level. Some people might feel that way when they are walking on flat ground; others might feel that way when they are jogging up a hill. Both are right. Only you know how hard your exercise feels to you."

So instead of me devising a point system, you can design your own.

Where does chasing after a toddler all day long rank? Pretty high I would think. Twenty points?

Scrubbing the kitchen and bathroom floors? Cleaning the oven?

You could go by the Borg scale and estimate your degree of exertion for any particular activity or chore. Obviously, subjectivity is at play.

Maybe I will take this mental exercise further and apply it to future honey-do lists.

I do know that traipsing from one end of Wal-Mart to another for three hours trying to locate my wife in full shopping mode is at the high end of the scale for me. I'm not certain what I would have to do in the gym to match that level of exertion.