This old dawgwalker is bugged about one insect in particular. In the past few days, it and dozens of its kinfolk have spread out all over my profusely blooming Lantana, which I have dubbed my miracle plant for its ability to regenerate in summer and fall after appearing to be a lifeless wreck in the winter.

Ruby-throated hummingbirds have savored the Lantana sweetness along with butterflies of many colors.

But now it is mostly just this one rather drab-looking insect, which I wouldn't mind, except that they are so numerous. 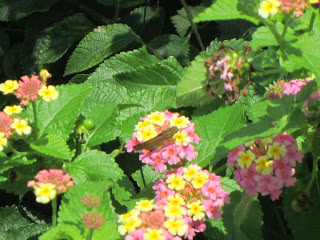 I would never spray poison on the Lantana  but I have turned the hose on these critters. Clouds of them fly up and out, but return as soon as I redirect the water.

Last night, I thought I spotted some on my nearby cedars. And that worried me, too. I am protective of my cedars as well as my Lantana. 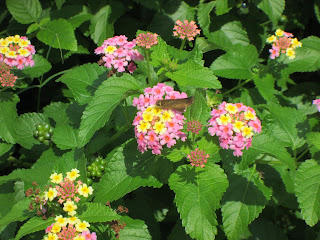 I wondered if they might be in the early stages of becoming full-fledged butterflies, but my Dear Wife says no way. And she knows more than I do about most everything except St. Louis Cardinal baseball.

Here are some photos I was able to take this morning. I may need to snap some closer-up to give you entomologists a better view.

They don't seem to sting, which is one point in their favor. Still, I wish they would go away.