Round Two of aqua therapy for the stenotic back came this morning, and I guess my young therapist concluded that I wasn't a completely decrepit old man after all. She really stepped up the repetitions and added new stretching exercises. It was all good and the warm water felt heavenly. It is amazing how much less stressful exercise is when done in the pool.

Afterwards, an afternoon nap might have been in order, but grand-dog Dasher, the 5-year-old yellow lab,  had decided he wanted a day off from his duties at Ripken baseball and so he was a house guest. And his begging eyes told me he wanted another walk like ones I had given him over Thanksgiving and the New Year's holidays. Today is perfectly delightful -- temps rising into 60s, wispy cirrus clouds below a Carolina-blue sky, sea breezes intoxicating -- so I decided to walk the big guy. He became more and more excited and impatient as the old man found his water bottle, sunglasses, back-brace, and dependable sassafras walking stick.

For whatever reason (maybe the soothing sea breezes?) Dash man was the best he's ever been on a walk, not straining on the leash much at all. True, that could be because no other dawgwalkers were stirring midday He considers it an affront if other dawgs are out and about with their masters.

At the retention pond he used to regularly swim as a puppy, he did try to bolt when he saw two mallards launch into the water. However, he obeyed my command to cool it, and did not try to drag me into the pond. Good thing; he probably could have. When we got close to home, he made it clear he did not want to quit. (What his limit might be, I don't know, but I am sure it far exceeds mine.) He reluctantly accepted my explanation that I had gone the extra mile for him and needed to rest, so we did. 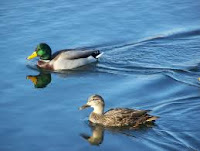 If Dash comes visiting and discovers we have a new canine resident resembling the late Sadiedawg, and she is a lady who likes to walk as much as Sadie did, I am wondering how I will keep both happy. The answer is by continuing to work toward mobility fitness, to such an extent that I can walk the brother and sister dawgs both (one after the other; not at the same time). That would put me on the road I want to be on. It is time to bring the beach back into the picture, too, with such delightful weather in the 50s and 60s.

As to the prospective new dog, I don't want to be specific just yet; don't want to jinx it. We've had our hearts broken a few times in the adoption process. It's got to be just right. I think Sadie is looking down on us and trying to make it so.