What Is So Crazy as a Dawg Day in May?

Until this morning, I thought Crazy Daisy -- the chocolate lab pup we kept for my son while we lived in the Blue Ridge Mountains -- was the only dawg ever to leap straight up and snatch bumblebees out of the air.

While I was having coffee on the patio this morning, just chilling and watching the birds, my goofball Ellie Mae did the same thing -- catching a poor bumblebee that was just buzzing around the beautifully blooming Lantana bush. She got the bee in her mouth, spat it out, and then because it was still moving, squashed with her paw. Not sure she would have then eaten it (she might have), but I intervened. 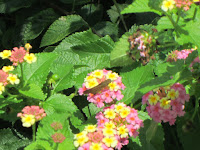 Now I have to worry about the hummingbirds that love to gather nectar from that Lantana. It looks like I will have to stand guard for them. Ellie Mae also leaps at birds -- a huge Blue Jay this morning -- that visit the feeders; however, she has yet to catch one of those.

A huge rabbit makes nocturnal visits to feast on seed that has fallen to the ground, and Ellie Mae goes ballistic to get out and after it. Before I set her free, I make sure the wascally wabbit has fair warning to make an escape. Maybe hunters would take pride in their dawg bagging such prey, but I generally like Nature's creatures to be moving freely (cooperhead snakes being one exception -- and I pray Ellie Mae never tangles with one of them).

As May barrels along toward the lazy, hazy, crazy days of summer (as the Nat King Cole song described them), we have observed much stirring in the bird world. For a long time, I watched just a lone Canada Goose on our ponds and I assumed his bride was sitting on a nest of eggs somewhere nearby. Sure enough, the mom and pop lately have been out with their goslings acclimating them to necessary activities on land and on water. One day I saw a third adult goose observing from a short distance, and I wondered what that was all about. A grandparent goose maybe? Or perhaps more likely, a lone goose without a mate with designs on latching on with this family? 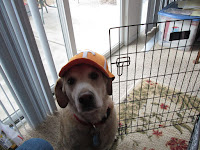 This morning, we saw a lone goose sailing on the pond and honking every few seconds for the longest time. I wondered if this was a mating call or a distress call of some sort. God forbid that some predator got the goslings. I also saw a pair of Mockingbirds angrily chasing and dive-bombing a hawk. Was it because the hawk had raided their nest -- or were they doing their best to keep it away?

Nature is majestic, but sometimes with cruel and violent twists. It is all part of God's design, but I don't think my goofball dawg gobbling bumblebees needs be a part of that.