Baseball to the Fore on the Fourth

Listening right now to some pre-Fourth of July fireworks going off outside my writing nook, so here's wishing fellow Americans a Happy Independence Day. This one will mark our nation's 240th birthday. We are still a young country.

This Fourth of July, our dominant colors here along the Grand Strand and in the city of Conway just 10 miles west are red, white, blue -- and teal, the color of the Coastal Carolina University Chanticleers. As you may have heard, CCU beat all the contending big schools from power conferences and won the College World Series played in Omaha. The players and coaches arrived home to a huge reception at Myrtle Beach International Airport just before midnight Thursday and then had a parade in Conway and a big greeting at a packed stadium back home at Coastal on Friday.

We are all a bunch of proud Chanticleers this holiday! It is refreshing to see college baseball receive so much attention. Football and basketball are the big-revenue sports, and so baseball is considered a minor sport. The Chants may have altered that perception, however. Their storybook triumph inspired folks from all around the country. Coastal could never have bought better PR than their baseball earned for them. The attention figures to bring more applications and other benefits to the university, where current enrollment is around 10,000. 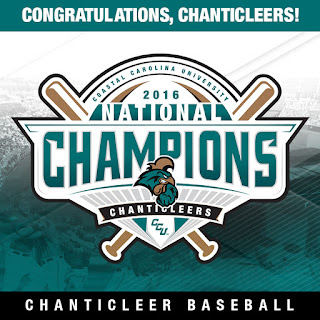 The way Coastal triumphed had a lot to do with generating nationwide excitement. I have been a sports fan for nearly three-fourths of a century and I don't think I have ever seen a grittier, more gutsy team than this bunch. Under CCU alumnus and Coach Gary Gilmore, the Chants played all phases of the game well -- bunting, base-stealing, occasional power, sharp fielding, and tough pitching under pressure. They showed the whole nation the value of teamwork.

At every junction, a prevalent thought from a fan (me at least) was that, "Oh they've done well to get this far, even though they surely will lose today." In the regionals at Raleigh, they had to come from behind in the 9th inning of a rain-delayed game to beat North Carolina State. And they did it! Ah, but their reward was then to play mighty Louisiana State at Baton Rouge in the super-regionals. Great to get that far but beating LSU 2 of 3 -- highly unlikely! Okay, so they sweep the Tigers 2 games to 0.

Then the Chants have to face nationally No. 1-seeded Florida in the first game of the World Series. No problem, they beat the Gators 2-1. Ah but then they lose to TCU, so even though it's double-elimination, they probably are near the end of their remarkable ride. No, then they beat Texas Tech, and come back and beat TCU not once but twice. Wow! Okay, but in the Finals, they fall to Arizona 3-0 in the opening game of the best of three, and don't look very good that particular evening. Surely the end of a wonderful run was nigh. But oh no it wasn't -- they come back and beat the Arizona Wildcats the next two games to become the national collegiate baseball champion!

As the Chicago Cubs' legendary broadcaster Harry Caray would have said, "Holy Cow!"

The bottom of the ninth of the championship game had me thinking I needed to have my cardiologist on call: Coastal ahead 4-3, but Arizona runners on second and third, two outs, count goes to 3 balls, 2 strikes, and Alex Cunningham strikes out the batter to seal the championship! You could sense a collective cheer go up all over the area at that moment. On a major highway, drivers pulled over, got out of their cars, and jumped up and down cheering. Speaking of pitchers, Andrew Beckwith, Mike Morrison, and Bobby Holmes were absolutely amazing throughout the Series, hanging tough with heavy workloads and showing iron arms and plain guts as CCU fought its way through the loser's bracket.

So baseball -- long a popular part of Independence Day celebrations -- has really come to the fore here along the coast of South Carolina this holiday. A serious lesson is that our divided nation could use some of the cohesion, leadership, and love for one another these Coastal Carolina guys showed in achieving a goal few expected to be within their reach.