Keeping a Weather Eye on a Big Storm

While enjoying a family getaway last week on Ocean Isle Beach, a silver of southernmost North Carolina connected to the mainland by a sturdy bridge over savannah marshes, we frequently watched thunderstorms brewing over the ocean. It is breathtaking to see the power of the skies interacting with the might of the ocean.

Now that we are back home along the Grand Strand of South Carolina, just an hour's drive from Ocean Isle, we are following an even more massive power surge that right now is tracking toward us: Hurricane Matthew, which is expected first to do heavy damage in Haiti and eastern Cuba. Currently, it is a Category 4 hurricane, the second most powerful. The approach of such a monster storm fills me with anticipation as much as it does fear (though that could change).

Storms have always fascinated me. I still have in our garage a fifth-grade science report I did on weather adorned with a big A-Plus grade from the teacher. It contains all sorts of intricate maps that I understood a lot better at grade 5 than I do now approaching age 75. My career dream was to be a weatherman. Journalism wasn't too far off that track because weather often is an element of news reporting or opinion writing. 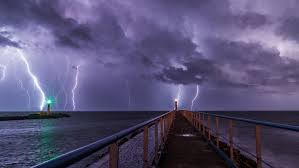 When I worked part-time in my college years for the Lexington (VA) Gazette. the article I wrote for that weekly (now merged into the News-Gazette) that made me most proud was about a massive snowstorm that brought Rockbridge County to a standstill. I had to gather information from many sources and put it together, and my piece filled the front page.

Hurricanes? We have experienced several. I was a teen-ager aspiring to be a newspaperman but carrying papers then, and along came Hurricane Hazel still roaring after coming ashore off the South Carolina coast (near where we live now). That was in 1954; my mom, ever the pioneer woman, helped me deliver afternoon papers in the eye of Hurricane Hazel. In 1969, my wife Allyne and I rented the upstairs of a farmhouse ("Red Hill") near Lexington when the remnants of Hurricane Camille came calling, up from the Gulf, merged in some freakish way with another weather system over the mountains, and dropped 32 inches of rain overnight. Whole families in the mountains and valleys of Virginia, particularly in Nelson County, were washed away and wiped out that night. We were lucky to be living on a hilltop, which was surrounded at dawn's first light by bodies of water that weren't there before.

So now we watch Weather Channel, local TV, and Internet reports about Matthew and all the quirky changes of track that usually go with hurricanes, and we wait. It is time to make preparations, and a plan for staying or leaving. It is time to have a weather eye out again and to respect the power of Nature.
at October 03, 2016