A Discovery to Gladden a Dawg's Heart

Today is the final day of February -- a month some February-haters proclaim to be the "longest" -- so Ellie Mae (Superdawg II) and I headed over to the large county baseball complex for our morning walk.

It is baseball weather, for sure. Temperature in the mid-70s rising to maybe 80 this afternoon, with humidity to match. Chance of a few refreshing showers, which we old dawgwalkers normally  appreciate.

Again today, following a big weekend for baseball games on these fields, we found left-behind baseballs and softballs galore. If we had brought along one of those tall batting-practice buckets, we could have made a good start of filling it with baseballs. I always wonder who has the money to throw away perfectly playable balls by just leaving them littering the fields after a day at the ballpark.

It brought to mind when I was a Little League coach and my son Bobby played on my team how we used to take a big bucket out behind the fence around old Parker Field in Richmond and find buckets of perfectly good balls for batting practice during the week. Triple-A players from the Richmond Braves franchise had hit them out. Sometimes they were hitting the dingers and we were chasing them as they bounced in the parking lot. (Bobby later began his career in sports management with the R-Braves, so I guess we more than repaid for all those great LL BP balls.) Oh, and while I am reminiscing, there was the time we went to a Braves' evening doubleheader, and Game 2 went into extra innings -- lots and lots of extra innings. Perhaps 21, if I recall correctly. Anyway we were gathering foul balls by the bucketful by the end of the action, given that we were among the few left in the ballpark. Finally, at 2:30 a.m., Bobby had ready access to the players for autographs. 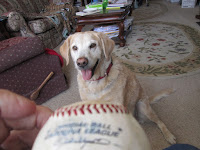 I digress, however. Today, Ellie Mae, who is quite a baseball aficiondado herself, zeroed in on a practically brand-new Carolina League ball and made it her own. I took her off the leash and let her happily play fetch. Now, she is using her very healthy (as confirmed by the vet yesterday) teeth to shred the baseball and later try to consume it as though it is a delectable mango as opposed to fungo fodder. I usually manage to intervene before the chowing-down goes too far.

We will be doing many more ballpark jaunts these summery mornings. A bonus is that we also can usually spot bluebirds there, which reside in dead trees in the swampy area beyond right field where many home-run balls have gone to their final resting places.