Challenges of August in the Subtropics 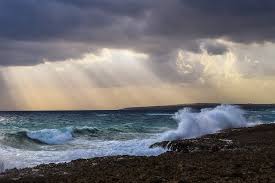 Came home from an early evening dawgwalk thoroughly drenched. It wasn't because of a torrential downpour like this morning's. Instead it was the result of 83% humidity at 9 p.m., pumping up the heat index to 89F. Talk about thick air! -- if only it tasted like cherry cheesecake. Trying to rehydrate now.

Meanwhile, the weather services report "two areas of concern in the Atlantic" -- meaning two systems, one in the Caribbean, the other off the coast of Africa, that could become tropical storms over the next week, and potentially then ramp up to hurricanes. It is pretty much anyone's guess right now whether either would hit the U.S. coastline. They certainly bear watching.

We are now into serious hurricane-tracking season. Hurricane season nominally begins in June, but 93 percent of our hurricanes have come in the August/September/October period. Three of the most destructive -- Andrew, Irene, and Katrina -- came in August. So it is time to get serious about storing water, restocking emergency supplies, and locating important papers. Meanwhile, The Junkyard Dawg and I will try to continue two-a-day walks in a South Carolina summer without melting down.