This day is ending on a rather weird note. I just checked where most people are viewing my blog right now, and almost 3,000 are in Israel, with just a few hundred in the USA, while readers are in the single digits in such counties as France, Russia, Ukraine, Brazil, Canada, Peru, and the Philippines. Now, I love Israel -- I immensely enjoyed a two-week visit there in 1976.  But I wonder why the disproportionate blog-following there. Is some kind of intel collection going on -- pertaining particularly to American dawgwalkers and their faithful four-legged companions? It is a bit of a mystery. Where is James Bond when you need him? (And of course the Bond women!)

The day began with me forgotting to put my step-tracking device on my wrist upon awakening -- after a rare night of taking it off at bedtime. I usually leave it on 24/7 -- after all, it assesses the lousy quality of my sleep as well as counting steps during waking hours. Anyway, I did not remember I was without it until after 4 in the afternoon, and during that tracking lapse I tried to keep up with my Dear Wife at shopping venues for what must have been at least 5,000 steps. So if I could add in those lost steps, I would have close to 10,000 steps for the day, a nice, healthy total. (Exercise is the best medicine, you know.) My loss made me think briefly of hooking up my Garmin Vivofit to the dryer on spin cycle in order to reclaim those lost steps. (Just kidding, but I wonder if some people who rack up huge totals on international step-tracking competitions pull stunts like that.) 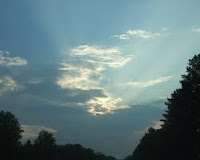 Tonight dawgwalking also was weird. Not a breeze, not even a breath, of air was stirring. Anyone worried about shortness of breath should find reassurance if surviving a walk in these conditions. If you can breathe on your own in this stagnant air, you are doing just fine. (The "feels-like" temperature was still 88F at 8 p.m.) Heading home at sunset, we noticed a bank of dark clouds to the west, and a clump of huge billowing clouds to the southwest. Ah, I think a thunderstorm is brewing, I told Elliedawg,  About 15 minutes after we got home, we heard thunder and then saw the lightning. The storm had arrived! Several minutes later, the NOAA weather radio sounded a severe thunderstorm warning, and a few minutes more, the alert appeared on the TV screen.

We had detected the storm forming before the Weather Service! Weird but wonderful. When you are out walking with your dawg, you sometimes see things -- including magnificent happenings in Nature -- before anyone else does.