On our dawgwalks at mid-year, we have seen a lot of aerial warfare, as in two, three or more small birds in hot pursuit of a larger bird, most often a hawk. From a distance, it seems as though the small birds get in a few hits on the big bird; however, I've never seen retaliation from the big guy. Sometimes I wonder how far this chase goes, and if there ever is a final showdown.

It is obvious the small ones are ticked off, and a few times I have seen from a few hundred feet what precipitated the hostility: a hawk (or other bird of prey) feasting on eggs in a bird's nest, or the baby birds. The parent birds can't stop the attack, but they sure can try to exact revenge.

On a recent day just before dusk, I was sitting on the patio when a hawk flew by not far above my head followed by two distraught mockingbirds. I bet those mockingbirds could put a hurting on anything; they were pissed and they were going to make some tail feathers fall for the crime. 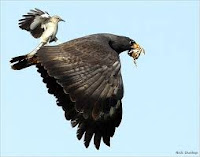 I guess the hawk never read Harper Lee's classic novel -- you know, what Atticus Finch said about how wrong it is to kill a mockingbird.

A few times when I've seen an attack underway on a nest, I've briefly wondered what I could do to stop the carnage. Throw a rock? Yell? Ultimately, though, I have concluded it is not really up to we humans to intervene. It may seem cruel, but it is part of Nature -- God's creation. Birds of prey are far from the only raiders of birds' nests, and consumers of the eggs and chicks. Squirrels do it, black snakes do it, even birds of varied species do it to birds of similar size -- for example, robins and blue jays go after after cardinals' nests.

So many predators, so many emptied-out birds' nests: Why, you might think that birds are committing genocide and they all will be extinct. Hardly. What threats exist could come from human overdevelopment affecting some species. But no neighborhood that I know of is running out of mockingbirds. Plenty of baby birds survive; others become food to sustain the cycle of Nature. We can just watch, and marvel -- though sometimes we cringe.