Today marks the one-month anniversary of this blog, "Walking Stick, Don't Fail Me Now." I am having a ball and I intend to continue it for the duration of my earthly journey, however far the good Lord has in mind for me to go. I find that writing about walking and senior fitness in general gives me motivation to do more, and to be in touch with my surroundings.

Given my cartilage-free left knee, I originally thought about naming this blog, "Diary of a Gimpy Guy"; however, that seemed entirely too copycattish. Jeff Kinney has sold 24 million (and counting) copies of his "Diary of a Wimpy Kid," and even though I am jealous for not having thought of such a children's book first, I have purchased a few copies myself, for my grandchildren. "Wimpy" . . . "gimpy"? -- nah, I will limp off and just salute Jeff for his inspired creation.

In my first month, I have written about birdwatching (and "birdwalking"), the special companionship of a loyal senior dog, keeping up with grandkids, snow walks, walking as a cure (sort of) for the common cold, the devotion to walking of Thomas Jefferson and Harry Truman, Satchel Paige's keep-moving rules of living, the battle of the waistline, writers writing about walking, cold-weather walking, walking's effect on mood, the value of short bursts of exercise throughout a day, and reflections on what to do about a knee that is worse than gimpy.

When I publish this blogpost, we should hit our first 1,000 page views as recorded by Google. As I sat on the patio a few hours ago resting from a good walk with Superdawg under a Carolina-blue sky, a bright red cardinal landed on the feeder several feet away and gave me a sense of adventures to come as we head toward Spring. The Great Backyard Bird Count in February will be an exciting event that we will spread from yard to nearby field and streams. Grandkids' soccer and baseball games will bring more opportunity for walking in the great outdoors. We will add outdoor swimming into the exercise mix as weather turns warmer (which doesn't take long to happen in South Carolina).

As for the gimpy knee, I am not going to obsess over that. The orthopedic surgeon will re-evaluate it in a few weeks. If it comes to total knee replacement, I will blog about that and the rehab after it. Loyal Sadie dog no doubt will be my live-in rehab nurse, just as she was eight years ago after my heart valve surgery. 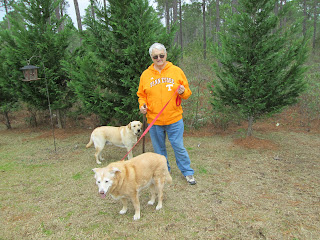 One way or another, I plan to be "On the Road Again" (with the words of Willie Nelson's song playing in my head). Happy trails!