Dogwalking in Preparation for Bird Counting: Eyes Up!

Superdawg and I set out on this morning's walk with the idea of preparing for the Great Backyard Bird Count on Friday. Actually, Sadie has little use for birds and is far more inclined to count cats and squirrels, but she humors me so long as we're walking. 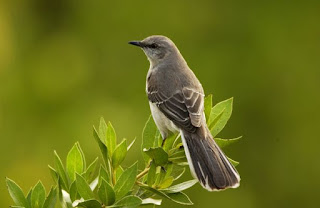 Wouldn't you know it, the first bird we saw was a Northern Mockingbird perched on a neighbor's roof. Mockingbirds are justly famed for having a repertoire of some 400 song types, plus the uncanny ability to imitate almost any sound with amazing precision. The words from Harper Lee's brilliant novel of the Old South ("To Kill a Mockingbird")  remind us that "mockingbirds don't do one thing but make music for us to enjoy . . . but sing their hearts out for us. That's why it's a sin to kill a mockingbird."

The "Mockingbird" novel has special meaning for my wife and me because she stood up to school officials who tried to ban the book from a Virginia county's high school classes back in the '60s, and as a young reporter covering the story I knew I had found my dream gal -- one willing to speak truth to power.

I digress. This morning's Mockingbird wasn't singing or dive-bombing cats or anything special, but seeing it made me wonder anew why I never see this bird on my feeders. Maybe I'm lucky, because I've found articles by birders complaining about Mockingbirds chasing all other birds away from their feeders. I read that the MBs particularly like raisins, fruits, seeds, and small pieces of bread. I have sunflower seed, but not the other delicacies. They also like suet feeders generously stocked. Perhaps I should add suet to my avian dining area.

Next I saw hawks circling overhead, and then at a much higher altitude, eight more of them. Hawks always seem to be out in numbers in coastal Carolina, perhaps because prey is abundant. As for identification, all I know is that these hawks were black, so I am calling them a Common Black-Hawk (no offense intended), although they could be a Zone-tailed Hawk. 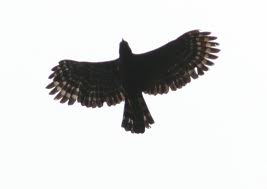 The next observations by the neighborhood pond were a couple of Mallard Ducks, and a long-necked, hungry-looking fresh-water forager that I took, perhaps, to be a Little Blue Heron, or maybe some type of egret. Obviously, my education as a birder is about on the kindergarten level. I will work at it.

Near treetops, which I hadn't bothered to observe on routine dawgwalks, I saw multiple nests -- some of them quite large -- that appeared to have been abandoned for the season. That made me wonder if the original feathered tenants would consider entering into short sales for returning migratory birds that might be in the market for a deal.

My final spotting on this walk with Superdawg was a large white bird with black marking on the underside of its wings. I thought the marks to be mid-wing, but what I can find in the bird books are on the tips. Most likely, I was observing a Ring-billed Gull, the guy that always shows up wherever people have littered fast-food parking lots or beaches. As a scavenger of litter that also poops in public places, this gull has earned a reputation as a pest. However, if this is the bird I actually saw, let me say in its defense that it is quite beautiful in flight. 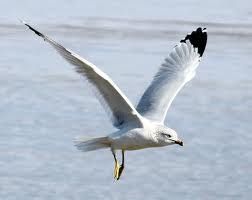 After this humbling start at training for the Great Backyard Bird Count, I went to a local sporting-goods shop and bought myself a pair of 16x birdwatching binoculars on sale half-price for $39.95. Okay, you could drop as much as $250 for other models of this indispensable birding tool, but my bargain one appears to work just fine. Thus, Superdawg and I are ready to start making more precise identifications. Actually, Sadie remains more on the alert for cats or things that slither or go underground. That makes us an all-purpose team, given that I have lifted my sights to the skies. We now cover our environment earth to the wild blue yonder.