Figuring Out Fidgety Gnatcatchers on the Fly

This morning brought bright blues skies and rising temperatures after two days of cold rain, and Superdawg would not be denied. I tried to lead her toward a nice, easy neighborhood walk, but she would have none of it. She slammed on the rear brakes, and tugged us toward the woodsy trail. Okay, I did her bidding (which will surprise no one who knows how I spoil dogs), and we wound up walking so far I had to return almost dragging my leg with the obsolete knee.

Nevertheless, I was glad I made the effort. It was an invigorating morning. We saw a lone goose flying and honking urgently overhead, which made me wonder if it slept late and was trying to catch up with its flock. We listened to two crows communicating with each other. Crows don't receive the press they deserve. They may well be smarter than the average bird. We used to see the same wise old crow every year when we vacationed on the Outer Banks and dined at Fisherman's Wharf Restaurant at Okracoke harbor (hush puppies to die for, and fresh fish right off the boats to the kitchen). Old crow was perched there right outside the window every year.

Anyway, this morning I again encountered excitable little birds fluttering in and out of thick bushes ringing a lake and emitting high-pitched "chips." I had encountered the same kind of birds at the neighborhood pond flying in and out of some small trees. They are so hyperactive that it's hard to get a clear view of them while we are walking, but this morning I did spot one in a brief flight above the bushes. It had a definite whitish underbelly with a darkish top but not as dark as the Junco.

I am 97 percent certain this bird is the Blue-gray Gnatcatcher. 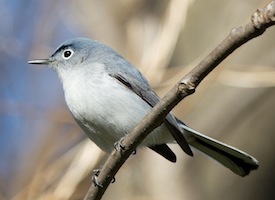 Here at the Cornell Lab of Ornithology, you can read about this tiny bird and its antics, and listen to its sounds, which are similar to what I've been hearing from the bushes. http://www.allaboutbirds.org/guide/Blue-gray_Gnatcatcher/id

My "Compact Guide to South Carolina Birds" (Lone Pine Publishing, 2007) states that "the fidgety Blue-gray Gnatcatcher is constantly on the move." Sure is! They like "deciduous woodlands along streams, ponds, lakes, and swamps," where they can feast on gnats and many other insects. Bon appetite, little Gnatcatchers!

It is exciting to figure out a bird you've so often just passed by and not given a thought to identifying. To be 100 percent sure, I will need to shoot a good photo of one.

Another pleasant thought is how much farther Superdawg and I will be able to walk (and how many new birds I will be able to "catch") if my knee replacement surgery goes well in April and I rehab as conscientiously as RG3 of the Washington Redskins is doing in an attempt to return to the playing fields this fall.