The Birds, the Dog, and I Tough It Out on a Cold, Cold Day

This was the toughest walking day Superdawg and I have had in 2013. We had gotten a rare snowfall last night here along the coast, and after the clouds skittered by, the temperature plunged to near 20. Then the winds came howling in at 30 mph this morning. Does this photo look like a dog happy to be outdoors? No, Sadie did not want to be out there by herself; however, she wanted her walk. She always wants her walk. She deserves credit for hectoring me into walking even when I really don't want to bestir myself. Were it not for Superdawg, I probably would weigh 300 pounds and have to use a walker to navigate the house.

So we ventured out into the uncommon frostiness of a Carolina morning. About two minutes later, we came back in so I could add my heaviest coat to my layers of T-shirts and hooded sweatshirts. We had a bitterly cold wind at our backs as we finally set out.

And so on our return, we were walking into the teeth of the frigid gales -- not a good idea. My obsolete knee was even more resistant to bending than usual. I felt like my eyes were going to freeze. Pretty much every step hurt. (I am being a crybaby, I realize.)

As for birds, we saw only one red-tailed hawk. It was gliding in the strong winds as if it enjoyed the extra force behind its wings. We saw no shore birds and not a single duck. They must have gone into their bad-weather shelters.

Back home, looking out back for the third of four days of the Great Backyard Bird Count, we did see birds on the feeder and the ground below it, but they were in a surly mood. I have never witnessed so much fighting among them. Perhaps the rarity of a South Carolina snowfall had put them in survival mode. Anyway, these are the kinds of birds we identified:

(Go to www.birdcount.org if you would like to participate. There is still time.)

The numbers and diversity were down from yesterday, when we had an all-day feeding frenzy. But perhaps yesterday the birds had some sort of extrasensory perception to know that stormy weather was en route. They say that members of the animal kingdom have that power, lacking in humans. Noteworthy have been their early evacuations from areas subsequently devastated by tsunamis. 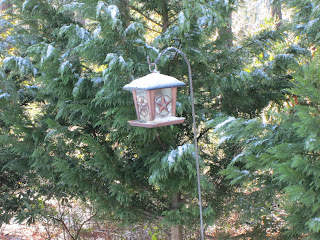 Snow and ice on the feeder: Provoking angry birds?

Yes, the snowfall was fun to watch last night. We don't see much of that around here. The half-inch we got is pretty much sticking around today, despite the sunny skies. It is pretty today but wickedly cold, and it hurts more than usual to walk. We had gotten spoiled with many fine days with highs in the 60s this winter. I know friends in New England and Canada are laughing at my complaining about a winter's day that probably sounds summery to them.

Anyway, Superdawg and I are better for having made the effort to have a normal walk. That's true just about always. Tomorrow will be sunny and in the 50s, and all of us (the birds included) will be in a better mood. Sing it Annie, "The sun will come out tomorrow, tomorrow. . . ."