Physical therapy is winding down -- Friday will be the final out-patient visit. The bionic knee is good to go; it clicks a little as I walk, but that is a happy sound so long as there is no pain -- sort of like the clicking some recipients of mechanical heart valves say they hear. (I have a quiet piggy valve myself.) Clicking to let you know you're ticking, or stepping out free with a new knee.

Anyway, it is time to settle into a summer walking routine, and that's where the temperamental Sadie comes in. Because the temperature has risen quickly the past few days and I the night owl have not, I have tried to do a late afternoon walk with the Superdawg (after of course letting her do her business out back in the morning at her leisure.). Well, it turns out she refuses to go the usual neighborhood routes to either the left or right. No, she wants to go straight across the street and behind the neighbors' houses into a rugged wooded terrain with a lot of jagged rocks and turf that snakes love to inhabit.

I am trying hard not to fall and bust my knee on rocks and stumps and glass, since the last thing I want is any more hospital stays. So I tug on her leash to go one of the safer routes. Before my surgery, she cooperated when I insisted on a route, but no more. She digs in and refuses to go peacefully. I could drag her down the sidewalk a few miles but that hardly seems like a stress-relieving walk. So we end up coming back in the house after walking just a few blocks.

I'm not quite sure what's gotten into Sadie. Maybe it smells good over there or maybe she wants to bag a rattlesnake or copperhead. Even at 12 the Canine of Steel is still quite a hunter. She's a deadly drone against the subterranean moles. 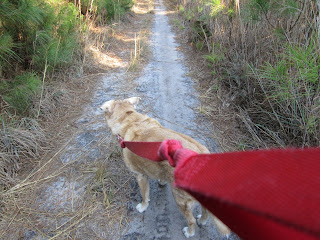 Or maybe she thinks that since I skipped out so long for the hospital and recuperation that she's rightfully in charge now. One way or the other, we've got to reach an agreement and move forward. Maybe I'll end up giving in and loading her in the car and driving to some pleasant walking area. There is the beach, of course, but it excludes dawgs between 10 and 5 and will be packed with tourists through Labor Day.