They Define Graceful and Gorgeous, and They Make a Hot Morning's Walk Refreshing and Renewing

Yesterday when I sat down to this blog, I was depressed. The humidity was so thick it could be sliced with a knife, and Superdawg and I mutually agreed that a walk probably would kill one or both of us. I wondered: Would it be like this all summer?  My plan to  walk at dusk had seemed to be a nice alternative, but here it was at 8 p.m., still stinking, oppressively hot. So we skipped the walk. I did do my knee-rehab exercises and icing, but they don't do much to lift the spirits.

What would be the point of putting foul-mood words on here, I thought. So I didn't. I hate to miss blogging days, but I need to have good observations to put on here. Sometimes, errands, doctor's appointments, or work (that's writing for pay) get in the way.

Last evening, we received some thundershowers that cleansed the air considerably and made breathing enjoyable again. This morning, Superdawg stared at me as I was finishing my oatmeal, and as if to ask: "Why not -- why wait until evening? This morning is right. Let's get moving, old man." So we took off on a walk at a good pace -- a nice test for my two-month-old bionic knee.

We heard and saw Mockingbirds that have been ubiquitous this late Spring -- darting everywhere, singing their hearts out with their repertoire of 400 or 500 songs. And I heard a lot of Bobwhites back in the woods. Does all this singing mean there is an avian nursery out there in the bushes?

I thought that would be basically it -- finis! -- for the morning's bird sightings -- two old but cherished friends. Ah, but then we reached one of the largest neighborhood ponds, and suddenly I saw a profusion of white on the water. The swans had returned! We had been looking for them since late winter; last year they had been around all four seasons. We watched a pair we called "our swans." We had been wondering where on Earth they had gone. Swans of course are notable for finding a mate and pairing for life. 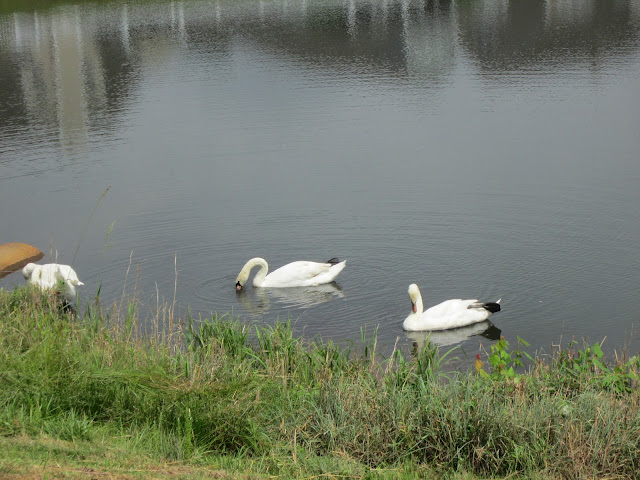 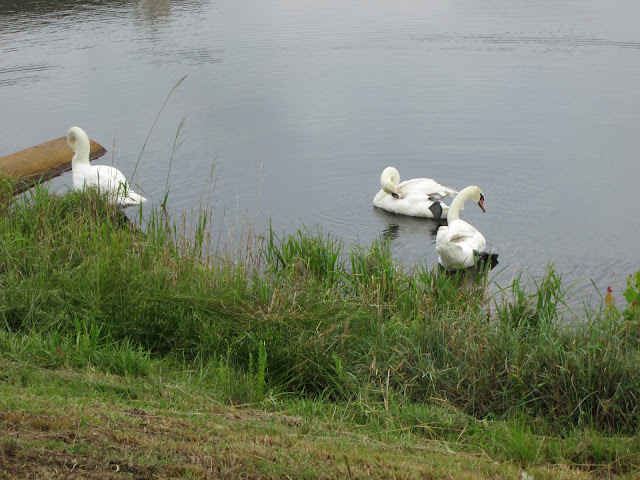 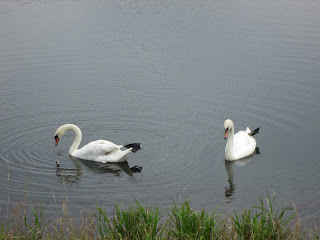 But what was I seeing this morning? Not one, not two, but three swans -- mute swans, I believe. Did a pair allow perhaps a widowed swan to join them for companionship? Naughty thought: Were these swan swingers? (My Dear Wife thought one looked like a big Daddy who had two ladies with him.) Or perhaps is one of the swans a juvenile that has not yet left the protection of its parents? (How do young swans go about finding a lifetime mate? Hmmm. Are there singles ponds and lakes -- or how does that work?)

Anyway, I got as close as I could without being obtrusive and took some photos. They aren't great because the three were busy maintaining their coats instead of sailing. When I first saw them, all three were also poking their heads and necks way under water, presumably to savor some fine delicacies.

I do hope they will be around for a long time now, either at this pond or others that Sadie and I walk around regularly. Seeing them did a lot to perk up my attitude and find new resolve to keep our walking program on track, one way or the other, through another South Carolina summer.

No doubt, though, that fall is our favorite season.