This Saturday provided a brief break in the spell of high humidity that's been keeping the heat index in the upper 90s. Around noon, temperatures were just rising into the 80s, but a refreshing breeze was blowing and the lower humidity was easy to sense. (I don't know what the exact reading was.) So I decided to take Superdawg on a walk that we hadn't been able to get in earlier in the morning. Further emboldened, I let her take the lead. Sure enough she headed right toward the wooded path that goes by a pond shrouded with thick vegetation and after a long walk on an ever-narrowing pathway to a large lake where we often see ducks and sometimes swans. She loves that route. We hadn't done the whole loop since I had my knee replacement. 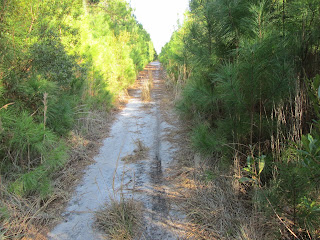 After maybe a half-mile, I realized this trek would be a test for both of us. Clouds had skittered away and the sun was bearing down hotter than I'd expected. Dumb me: I didn't bring any water. And then we followed the tiny path with a creek on one side and ultra-thick vegetation on the other. I would later discover that a Reptile Expo was going on this weekend at the Myrtle Beach Convention Center, complete with geckos for sale. Heck, we could have harvested all sorts of reptiles along our pathway; they slithered across our trail from left and from right. Luckily, none of them were copperhead snakes. (Yes, it has occurred to me that it is not really smart to walk this route this time of year, but I do keep my very sturdy Carolina Hawthorn walking stick at the ready to ward off any reptilian intruders (or coyotes, for that matter). If we see a bear or if a gator emerges from the creek, we will just run, even though I'm not supposed to run on my bionic knee.

Anyway, we got all the way to the big lake and started to make a more shady loop back homeward, only to discover that the developers are carving out a road back there, evidently to make way for more houses. That's good for the economy, I suppose, but bad for conservationists like Superdawg and me. So we had to turn around and retrace our steps along the sunniest pathway. As Sadie panted heavily and I perspired profusely, it occurred to me that one or both of us might not make it. What then? Superdawg's 63 pounds would be a heavy load to haul. And if I went down, I wondered if she would fill a Lassie role and run home to alert family to come get me. Even though I had no water, I did have my cellphone (which I should always remember to bring). 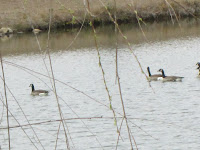 Well, obviously since I'm writing this, we did make it. Superdawg was none the worse for wear after lapping a bowl of water and taking a nap. I forged ahead with housework, and then was refueled by a huge seafood buffet to which my son treated me and the Missus.

One piece of positive news from this is that I completed my longest walk since my April knee replacement -- about 2.5 miles -- with no knee pain at all. The bionic knee did make a clicking sound, but my orthopedist told me the other day that it probably always will. That's okay -- I consider it a happy sound -- the sound of freedom of mobility. As for Superdawg, she passed an endurance test after being under the weather a few days ago. She certainly still has the zest for an active, walker's life. Under lessons learned, I would say always bring water. Some sort of weapon of self-defense to back up the trusty walking stick might not be a bad idea either. Maybe even a small first-aid kit and some bug spray. And a snack in the event of low blood sugar? Yeah, but too many supplies would require a backpack, and it was kind of fun on this sweltering (though fairly low-humidity) day to take off my shirt and get a little tan while on the remote back trail. 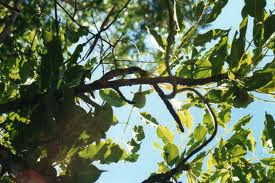