What a great evening to run across the latest health news about the kind of obesity that can really do you in. My reading came after I had indulged in KFC for dinner for the first time in maybe six months.

Oh come on, food nannies, I can splurge on the Colonel's fare once in a long while, can't I?  By the way, I took the cashier up on his offer of packets of honey to go with the biscuits and chicken, and found them tasty. But afterwards I read the packet and found that they are actually "honey sauce." Top ingredient: "High fructose corn syrup" -- yeah, the bad stuff. Each packet is a whopping 7 percent honey. As small as the packets are, how much money does KFC save by whipping up this fake-honey concoction as opposed to squirting some real honey in there? 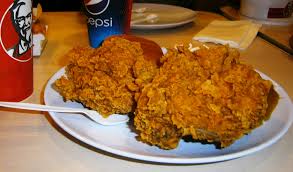 Anyway, back to the news of the day. From the online HealthDay News, I learned that some folks who are of "normal weight" but have too much belly fat actually may be at higher risk of heart disease than some folks who are categorized as "obese." Again, this shows how misleading the body mass index (BMI) can be in relating weight to height and telling us if we are okay or obese. I wrote the other day about a scientific finding that the BMI should be replaced by a more accurate measure.

So you could have a BMI telling you your weight is in the "normal" range, and yet if you have central obesity -- that is, excessive fat in the abdomen -- you may have a higher health risk than some people rated as obese. That's because central obesity elevates insulin resistance. And people with this accumulation of fat around the middle tend to have less fat in parts of the body where fat might be protective, such as the legs and hips. Oddly enough, some obese people do have fat in areas where it may be protective; furthermore, they tend to have more muscle mass than the centrally obese but normal-weight folks. Wow! 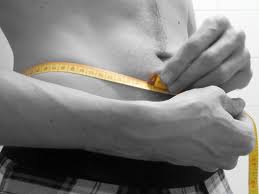 What does this mean in everyday terms? A WedMD article by Sonya Collins discusses the fat we can see (the fat we fret about) versus the fat we can't see -- the "visceral fat," and that is precisely the fat about which we should be concerned. If you have too much, it can start settling and storing in and around the heart and liver, and cause real problems.

How can you tell if you have too much visceral fat? A CT scan or MRI are the most accurate measures, but they are expensive and can't be ordered up routinely. The most practical way for most of us is to wrap a tape measure around the waist while we are standing, and then read and weep at the numbers. A woman's waist size should be below 35 inches, and a man's should be sub-40 inches.

What can you do? There are no secret formulas.

1. Get some vigorous exercise.

The WebMD writer touts vigorous exercise like jogging or walking briskly at an incline on a treadmill. But those of us who are overcoming senior challenges (such as having a knee or hip replaced) cannot safely run anymore. For us, there is brisk walking of a companionable dog, a good spin on a stationary bicycle, or swimming (or jogging in the water, a low-impact, safe environment.)

In the final analysis, I don't constantly fret about every morsel I consume or whether my exercise routine wasn't as complete as it could have been on a given day. My numbers -- whether BMI, scales, or tape measure -- are not the prettiest. The game is all about doing the best we can to be reasonably fit and enjoying life to the fullest.