It's August: Deal With the Heat; Move Those Feet

I have two doctors, my left leg and my right.
--- G.M. Trevelyan
British Historian

Welcome to August, the month named for Roman Emperor Augustus, but better known for the Dog Days and oppressive heat and humidity. However, any month that celebrates National Elvis Week can't be all bad.

On this first day of August, I discovered I have something in common with NBC News anchor Brian Williams. He told of playing high school football and taking a hit that "reversed" his knee, which I assumed to mean that his knee bent the wrong way. I had the same experience in a football scrimmage when several players fell across my extended left leg, "reversing" my knee. Even though I went on to play sports and even run some marathons, the knee never worked right again after that hit.

Brian is having that old football knee of his replaced in a few weeks. I had mine done back in April. Williams and NBC's chief medical correspondent Nancy Snyderman did an interesting feature on total knee replacement on tonight's newscast.

Maybe August is a good month to take time off for either going to the beach or getting a procedure like a joint replacement done. Some days just seem too stifling for exercise. However, think about all those outdoor events in October and November -- all the walks, 10Ks, marathons, softball and soccer tournaments, and hiking expeditions. August is the month when you need to be getting your training into high gear for the fall competitions. Besides, after you've survived August, think how much more refreshing the cool air of autumn will be. 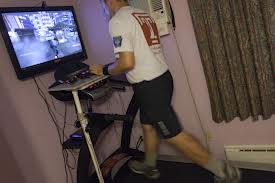 I am starting training for my goal of completing the 3-mile segment of the annual Heart Walk on October 12. It will be a good six-month's post-op test of my surgically replaced knee. And then I will do the Walk to End Alzheimer's, a shorter jaunt, on October 26.

Speaking of good-health causes, the news wires brought more reports today of studies showing the great benefits of regular brisk walking. It seems as though such stories are in the news almost daily. I never tire of reading these articles.

Science Daily, one of the services on My Blog List, reports on research out of the University of Maryland School of Public Health showing that a treadmill-walking program improved cognitive function for older adults at risk of Alzheimer's disease. The subjects (average age 78) had mild cognitive impairment, a possible harbinger of Alzheimer's, yet experienced improved memory recall and brain function after participating in the organized exercisee with the help of a personal trainer. (You can read the details for yourself at Science Daily on the right-hand side of this blog.) 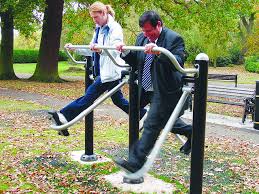 Meanwhile, a study from Northwestern University's Feinberg School of Medicine found that neighborhood-based walking helped participants ease the leg pain associated with peripheral artery disease (PAD).  No one is suggesting a cure-all, and more research needs to be done; nevertheless, this seems to be further evidence of the beneficial effects of walking.

But the sages down through the years have known this all along, haven't they? One of my favorites was the Eisenhower-era pioneer of preventive cardiologist, Dr. Paul Dudley White, who once said this: "A vigorous five-mile walk will do more good for an unhappy but otherwise healthy adult than all the medicine and psychology in the world."