Sometimes, the Best Workouts Are Incidental

Today I got quite a workout at the hospital. No, I wasn't a patient. It was my turn to visit heart-surgery patients as part of our Mended Hearts chapter's volunteer support. We had more patients than usual, and then we had a monthly meeting late morning, too. So I really had to move faster than these old bones usually do these days.

The real test came when I decided to avoid using the elevator to visit the patients on upper floors. My decision was sealed when I started hearing public-address announcements about impeding tests of the fire and safety systems when lights and sirens would be going on and off, and we should be just be ignoring them. Test or not, there was no way I was going to be in an elevator when all the electrical stuff was being stressed. I have been somewhat phobic about elevators since getting stuck in one at a medical clinic many years ago. I often take the stairs instead, and I surely would during a fire alarm.

So of necessity, this would be a good test of my total knee replacement at four months into the rehab phase. My PT had had me practice on the stairwell a couple of times, and I had done well. But this would be the first time I had climbed several flights of stairs by myself. 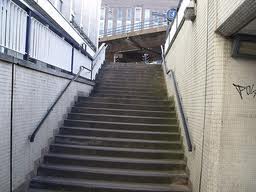 It was a revelation. I went up the stairs much more smoothly and without pain than I had in years. I followed the therapist's instructions exactly: Going up the stairs, take the first step with the "good knee and leg" (the non-surgical one; the right knee), and then going down take the first step with the "bad" one with the bionic (left) knee. "Up with the good, down with the bad." I'm not quite sure why this order is important, but I complied. (I also should note, though, that it's getting harder and harder to distinguish my "good" knee from my "bad" knee. In fact, there are times, increasingly, that the new bionic knee seems stronger than the one that is still factory-original. )

In short, the stair-climbing not only burned calories but was a good morale-boost as I train to captain the Mended Hearts team in completing a three-mile Heart Walk in October for benefit of the American Heart Association, When I step out, I think I will lead with my truly good knee -- the left one. 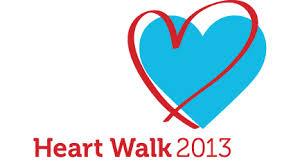