Most of My Words Are Cheers When Cards Make Postseason

The Steadfastdawgwalker blog has not seen a lot of blogposts in October, which is contrary to my earnest intention of posting every day. There is a reason, if not an excuse: My lifelong favorite baseball team, the St. Louis Cardinals, has again made the baseball postseason, and has advanced to the National League Championship Series after an exciting battle with the resurgent Pittsburgh Pirates in the divisional series. If they can defeat the formidable LA Dodgers in the best of seven showdown, they will advance to the World Series and have a shot at their 12th championship, the most for any NL team.

How does following the Cardinals help my fitness level? I think family members who watch me watching games know that I move up and down and side to side with every pitch and hit, trying to get just the right English on the ball. They also know I exercise my lungs fully. When young David Freese won Game Six of the 2011 World Series with late-inning long balls, my next-door family heard my yelling all the way over there. They know how fanatic I am. On my 11-11-11 birthday, they had a big Cardinal-themed party featuring a Redbird-decorated cake and celebrating not just my 70th birthday but the Cards' 11th World Series Championship. 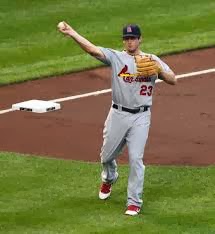 Although I have family roots in Missouri (Independence, hometown of Harry S. Truman), I became a Cardinals' fan for life when I was a tyke in Richmond, Va., and became fascinated with Stan (the Man) Musial and everything about him. His crouched batting stance (described as resembling a kid peeking around a corner to see if a cop was coming) particularly captured my imagination. I spent hours in front of mirrors trying to copy Stan's stance exactly. I also bounced a ball off the side of an apartment building and pretended I was Stan the Man snagging fly balls in the outfield or scooping throws at first base. When I later was the clean-up hitter on my high school and American Legion teams, I used a much different stance than my idol -- feet spread apart, far more upright. I don't think anyone has ever duplicated the Musial stance, and I know there has never been a better guy in baseball than Stan. 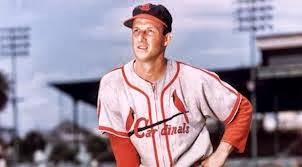 Many Cardinal heroes have thrilled me down through the years -- to name just some that jump to mind: Ken Boyer, Ozzie Smith, Lou Brock, Orlando Cepeda, Bob Gibson, Harvey Haddix, Curt Flood, Roger Maris (yes, two great years with the Cards), Reggie Sanders (two great seasons also for the ex-Cincy Red, and he does a lot for youth sports now right here in my hometown and even coached my granddaughter's soccer team), Tim McCarver, Mike Shannon, Dal Maxvill, Julian Javier, Bill White, Albert Pujols, Chris Carpenter, Matt Holliday, Allen Craig, of course Yadier Molina and many, many more that haven't jumped to mind but will soon. Today's team is particularly exciting because of all the strong young pitchers who have come up through the farm system. They should make the Cardinals contenders for years to come -- guys like Michael Wacha, Joe Kelly, Shelby Miller, Carlos Martinez, Trevor Rosenthal, and Kevin Siegrist. 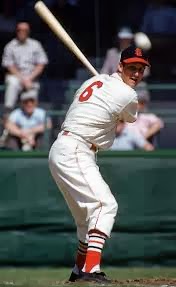 So in October my blog and other writing have stagnated, but my adrenalin is flowing. The Cardinals help keep me motivated to keep moving. I think Superdawg must be a fan, too. She's right there on the rug in front of me during the games, even when I have the sound turned up to hear a jazzed-up Busch Stadium crowd roaring after a "Big City" Matt Adams' home-run or an Adam Wainwright curveball dropping off the table for strike 3 against the opposing team's top slugger.