My good friend, nationally syndicated cartoonist Gary Brookins ("Pluggers" and "Shoe") has got me pegged just right. Redbird Fever has reduced my production on this dawgwalking blog considerably this October. Gary noticed this, and knows from experience how my Redbird fanaticism affects my behavior and moods. When the St. Louis Cardinals are in baseball's postseason and especially when they battle their way into the World Series, a lot of my concentration is on them, game by game. That must have showed when Gary and I were newspaper colleagues for many years at the Times-Dispatch in Richmond, Virginia. 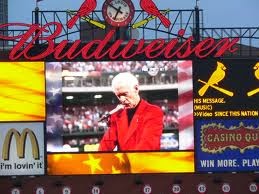 The Cardinals have given me much joy over the years since I adopted them as a kid in the 1950s as my team. In an earlier blogpost, I wrote about how my admiration for Stan "the Man" Musial played a big role in that. Note that No. 6 the Cardinals are wearing on their sleeves in the 2013 World Series against the Red Sox. That is in honor of Musial, who passed away earlier this year at the age of 93. When slugger Albert Pujols was with the Cardinals for 11 sterling seasons, baseball scribes tried to dub him "El Hombre," but Pujols would have none of it. Only one Cardinal is "The Man," he asserted, and that's Stan.

The Cards have been in many exciting Fall Classics prior to the current one. One I remember fondly is the 1967 World Series against the Red Sox. As a young reporter and newlywed, I would come flying into our apartment between assignments in mid-afternoon, flinging off my coat and tie, and settling onto the sofa to catch as much of the game as possible. The games were mostly in the afternoon back then, or maybe all of them were. The Cardinals won that one in seven games, and my most vivid memory is of Bob Gibson, the greatest Cardinal pitcher ever, striking out batter after batter. The 1982 win over the Milwaukee Brewers (then in the American League) in seven games was another of my favorites. I think of it as the Willie McGee series in honor of the gangly rookie center-fielder who did it all in the field and at bat. 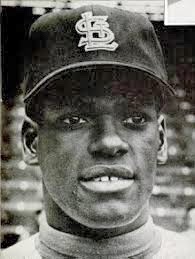 Of course Game Six of the 2011 World Series, when the Cardinals were twice down their potential last strike but came back to force a Game Seven and to win it, lives in memory forever -- and also is in my complete 2013 World Series DVD collection given me by my daughter Kristina. I don't know if the current Red Sox/Cardinals Series -- now tied at 2 games apiece -- can live up to that one, but it has been pretty exciting and fairly bizarre (which October baseball tends to be).

So this at least partially explains my preoccupation. Reading box scores has been a staple of my existence just about forever. And baseball has fired my imagination since the days I heard games called on the radio by such immortals as Harry Caray and Bob Prince and enjoyed the early TV games of the week called by Hall-of-Famers Dizzy Dean of the Cardinals and PeeWee Reese of Dodger fame.

Ah but I love dogs, and kids, and birds, and Nature, and the pursuit of fitness (however checkered), and so it will be good that my 24/7 preoccupation soon will end. I can think of Next Season then while engaging in the Christmas bird count. And by all means I will be more conscientious about my blogging. I need to make it as daily and consistent as a boxscore.