Ducking Out After a Good Blood Draw

For our mid-day walk, I had a little more bounce in my step. I had just gotten some very good news from a doctor's visit.

To summarize: For two years, I have been regularly seeing a hematologist  at a prominent cancer center because of my doctor's concern about my hemoglobin level being in a steady decline. It had gone into anemia range and kept falling. It could be just an old age thing -- but what if it kept falling and falling?

Every six months, the specialist's nurses would draw my blood and the hemoglobin would be down a bit more -- not a lot, but down each time. It was a trend, and not a good one. If this kept up, the doctors said I probably would have to have a bone marrow test -- no fun.

Well, today, in yet another visit to the cancer center during the middle of Christmas season, I was apprehensive. The scales were not kind -- too much holiday eating. The nurse's blood draw was super-efficient. It could not have taken more than 30 seconds. So then I waited in the exam room to hear the news.

And was the news ever good! For the first time since they had started monitoring me, the hemoglobin number was up. And not just by a little -- a lot. A whole gram. That was about the happiest I've ever been in a doctor's office. They still want to see me again in six months, but it looks like the trend has been reversed. There is no certain reason. It could be a med we stopped at my suggestion. Or my thyroid level improving with the help of a thyroxine med. Or any number of things. Maybe I finally found a nutritional supplement that actually does some good, who knows?

So that's why I was extra-enthusiastic when slipping on Superdawg's leash for a good walk.

The crisp air and the sunny sky would have been enough, but as a bonus I saw a small bird on the pond that kept going under water and then resurfacing eight or 10 feet farther away. 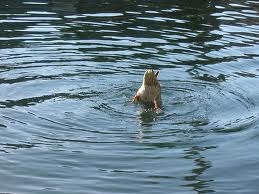 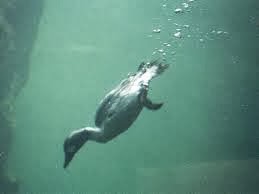 It wasn't the Double-Crested Cormorant, the fishing bird about which I've written before. This bird was much smaller, and actually it looked like a duck. Could that be? Well, if it walks like a duck, quacks like a duck….dives like a duck?  Upon returning home, I quickly scanned my bird books and found that, yes, there are such birdies as diving ducks -- several different kinds of them, actually. They are usually called pochards or scaups, and they dine by diving under water. There are a huge assortment of them: marbled, pink-headed, Southern Pochard, rosy-billed, canvasbacks, tufted, and even the hardhead.

I don't pretend to know which kind of diving duck I spotted, but it was fascinating to watch. Maybe I will dub the guy the Southern Pochard until I take its photo and do more research. There is always some reward to be found in Nature if you keep your eyes peeled. And it helps to be in a good frame of mind, too.