With but a few hours left in this fast-paced month of September, I find myself composing this blogpost while watching the American League Wild Card game using my left eye's peripheral vision. Go Royals! This September has been like that -- so much going on that it is hard to keep up. While Dear Wife and I were celebrating our 48th wedding anniversary, our 10-year-old granddaughter Hannah was one of six kid athletes being honored in Baltimore as Under Armour's Team Next. It all had a dream-like quality and it all happened so fast.

Everyone needs a getaway now and then, so DW and I are spending a few days in the magical seacoast village of Southport, North Carolina, while our son and his family take care of our humble abode back in South Carolina along with Sadie the Superdawg. Southport juts right out into the convergence of the Cape Fear River, Intracoastal Waterway, and Atlantic Ocean. When we arrived this afternoon, I chowed down on the best crab cake sandwich ever while watching a fisherman pull one plump catch after another right out of the water lapping the shore.

The ancient gnarled oak trees of Southport are seemingly everywhere, and apparently enjoy almost a sacred status. We saw one with deadwood in its midsection while sprawling over the balcony of one of the little shops dotting the village -- yet apparently no one gives thought to taking it down to prevent storm damage. This reverence for good old trees stands in welcome contrast to places (such as just beyond my backyard) where developers lay waste to forests without thought of preserving some of the sturdiest trees.

Anyway, we are just beginning our retreat here in Southport, and we have much to discover. I will write more of what we find, and post some photos, too. September is ending tonight on a relaxing note. It is good to slow down once in a while and reflect. 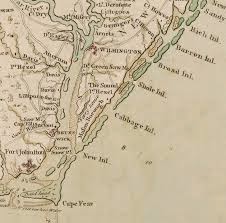