Relaxing at Dusk with a Few Friends

At the start of a hectic Saturday, the first thing I did was run to the grocery store to buy an emergency resupply of birdseed.

The stock had run completely out and I hadn't had time to go to Sam's Club for another 40-pound bargain bag, which usually lasts at least a month.

Later, I was glad that I had paid the Food Lion price for a small premium bag, because after a non-stop day of dawgwalking, and honey-do errand-running, relaxation came from sitting on the back patio for a full half-hour as still as possible and watching which select few birds were still feeding at sunset.

One of the bravest was an Orchard Oriole, handsome fellow with the chestnut body and black cap, that apparently bought my statue imitation and hopped within a few feet of the patio feasting on fallen seed. I often see this guy (or a lookalike) feeding solo. It's fun to just relax completely and wonder how much closer he might come before flying (or hopping) off. 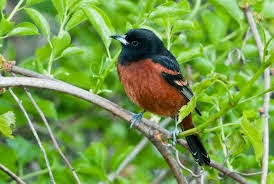 Another visitor at dusk was a Carolina Chickadee that flitted quickly from the bird bath to the feeder to a pine tree, and back again, several times. Its energy level was still high, making me wonder how chickadees decompress enough to get a night's rest. Do they have a natural source of melatonin stashed away?

All the while, a female Northern Cardinal was nervously flapping from one cedar tree to another behind the feeder, not taken in by my statue imitation and obviously afraid that I would do her harm if she tried to have some of the feed I provided. One birdland mystery is why some species will practically eat out of your hand while others are scared if you are within 50 feet of their nature preserve. I didn't feel guilty, though, because I can look through the window and see the cardinals getting their share of the grub during all daylight hours.

Sunset was a nice time to just chill out with the feathered friends. To the left, the moon was rising over the ocean and to the right the sky was still crimson from the sun's setting after a sparkling day. Not often enough do I just take a deep breath and relax. Today I discovered a great way to do just that.