76 Trombones to Soften a Pyrotechnic 4th

We love Fourth of July fireworks as much as anyone (well, almost anyone over 60 years old).

After all, one of our Founding Fathers, John Adams, declared with amazing prescience that our nation's Declaration of Independence would "be celebrated by succeeding generations as the great anniversary festival. . . {with} pomp and parade, with shows, games, sports, guns, bells, bonfires, and illuminations from one end of this continent to the other...."

Nevertheless, neighborhood fireworks that continue unabated late into the evening -- 11 p.m, then midnight and on and on -- can be a real annoyance. After all, there are some folks who have to go to work the next day, some who have sleeping babies, and (in our case) some who have terrified dogs.

Our sweet senior Sadiedog has a real phobia about fireworks. Thunderstorms and the occasional summer fly that sneaks in the house also scare her badly. Not to mention the squeaking sound of sneakers on a tile floor -- a sound she associates with smoke alarms letting it be known incessantly through a night that they need a change of batteries.

But fireworks are the worst. 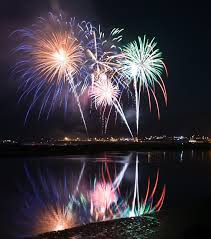 If we were inclined to go to the beach for the spectacular Fourth of July pyrotechnics, we would have to get an empathetic dogsitter for Sadie. It would be cruel to leave her alone. In any event, our natural inclination is to watch fireworks shows such as PBS' "A Capital Fourth," so we are around to comfort her as best we can, even though she shakes and shivers almost continuously.

This year, we had a full-scale bombardment on the land behind us that is in an early stage of development for single-family homes, so amateurs brought the beach show to us.

Fortuitously, I found a partial solution in surfing the TV for something July 4-related after the D.C. fireworks show ended. What I found on one of Ted Turner's old-movie channels was delightful: "The Music Man" musical in full glorious color offering a delicious slice of Americana from Iowa featuring "Professor" Harold Hill (Robert Preston) and Marian the Librarian (Shirley Jones). It had been decades since I watched this classic about the charismatic con man, his lady love, and a staid River City's sudden infatuation with music and dancing. My wife said she thinks she had never seen the whole movie (which originated as a Broadway hit in 1957, featuring the work of Meredith Willson.)

You know the story so no need to outline the plot here.

Anyway, we blasted the TV volume to get the full effect of "Seventy-Six Trombones," "Marian, the Librarian," and numerous other musical classics -- and to muffle the sound of the explosives.

It helped! Greatly. Sadiedawg retreated to one of her bomb shelters -- the utility room -- and did not slink out to the living room shivering and shaking the rest of the evening. "The Music Man" was on 'til 1 a.m. I think the music helped sooth her nerves. I know it and the improbable love story brightened our spirits.

Something I don't say that often: Thank you, Ted Turner.

Something I do say a lot, especially in these troubled times: God Bless America.