No Dog Should Be Lonely

In my Sadiedawg's final year, it became tougher and tougher to continue our walks. She stumbled and nearly fell often. I had to battle the lower lumbar pain that spinal stenosis began delivering me a dozen years ago. But we soldiered on.

Now walking is even harder without Sadie. The temptation is great to just avoid the pain and sit on the back patio watching the birds. However, I know I must get back at it. The past two days have helped by offering a preview of autumn-like weather with low humidity and temperatures of 70 in the daytime and 50 at night.

To begin training for the community Heart Walk next month, I took a walk at Broadway at the Beach while my wife attended a meeting this afternoon. The Walk with thousands of participants plus bands and cheerleaders on October 17 will be around the perimeter of this large shopping center, with one-mile and three-mile loops. The hard surfaces did not ease the pain, but the availability of a Starbucks did. Later, I took a neighborhood walk at dusk for the second straight day. I think I have even shed a pound or two with this new walking resolve. Next, I need to be able to report weight loss in 10s -- it would take some of the strain off my stenotic back.

During my walks at dusk, I have seen one sight that left me a little melancholy. Call it the saga of the lonely black dog. The following comes from a post I made on a Staying the Course online heart forum I lead: 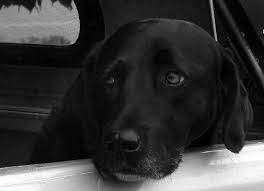 Sad thing on my walk -- I saw the same sweet black dog I see about every time I walk -- alone in his back yard, this time with night falling. I see him in mornings and afternoons, same way. Granted, he has it much better than dogs that are chained outdoors, which is cruel in my opinion -- this good dog has an electric fence, a good-sized yard, and what looks like a sturdy dog house under a protected overhang up against the house. So he probably would be comfortable out there most of the time -- except in case of a big storm, or extremely cold or hot weather. I just wonder if he ever gets to go inside. I also wonder when he gets love and attention. I have never seen anyone out there petting, praising, and playing with him. When he sees me, he barks a little but I start praising him as a good boy and he starts wagging his tail. A few times, I have probably stepped over a line and gone into his electrified yard to pet him. I am tempted to bring him treats, which probably would be wrong.
But what the hell, dogs are sociable creatures, loving creatures, man's best friend. This boy needs praising and loving. He needs to be able to go in the big house, the people house sometimes, too. Why the devil do some people get dogs and then just use them as inanimate yard ornaments?

Let me clarify that there are outdoor dogs that are happy and quite well cared-for, with protective shelter, nourishing food, and fresh water -- and no chains. My point is why would some owners not go outside and give outdoor dog some playtime and praise once in a while? Maybe the black dog is not as lonely as he seems to be. Maybe he has gotten plenty of friendly attention when I am not walking by. However, I walk that route so often and at such varied times, I have to wonder.

All I know is that if I do find a Sadie the Second eventually, she will be curled up by my feet while I am on the computer and taking me on long walks every day.